What Does 2020 Tell Us About the GOP in Future Elections? 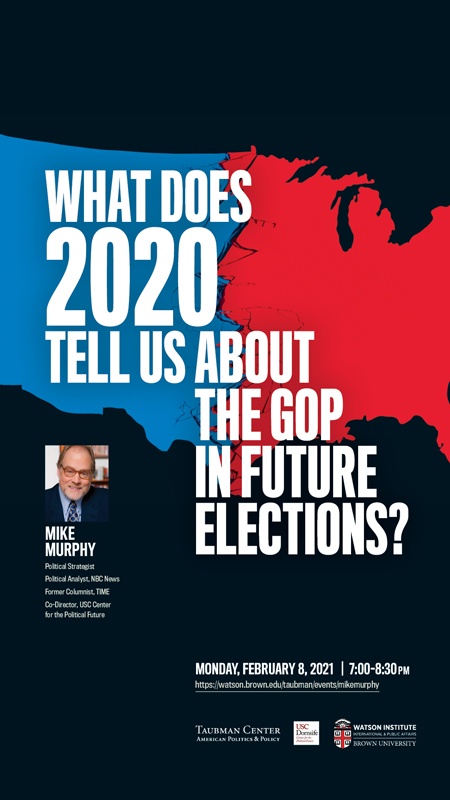 Among the most interesting and effective organizations during the presidential campaign and since has been a group of former Republicans calling themselves the Lincoln Project. The Lincoln Project was responsible for some of the most provocative and devastating campaign ads against President Donald Trump. During the 2020 election, the Lincoln Project reportedly spent $67 million in opposition to Trump and “Trumpism.” Among its most prominent and important participants is Mike Murphy.

Mike Murphy for decades has been one of the Republican Party's most successful political media consultants. Murphy has been called a "media master" by Fortune magazine, the GOP's "hottest media consultant" by Newsweek, and the leader of a "new breed" of campaign consultants by Congressional Quarterly.

Murphy is a partner in the Revolution Agency, a strategic communications firm in Washington, D.C.

He is a respected pundit and political analyst. He writes the widely read "Murphy's Law" column for Time magazine and appears frequently on the Meet the Press Roundtable. Murphy handled media and strategy for more than 26 successful gubernatorial and senatorial campaigns for Jeb Bush, Mitt Romney, Arnold Schwarzenegger, John Engler, Lamar Alexander, Slade Gorton, Spence Abraham, Paul Coverdell, Dirk Kempthorne, Jeff Sessions and many others. He served as a senior strategist for John McCain's presidential race in 2000. He also serves as the co-director of the Center for the Political Future at the University of Southern California. Murphy is co-host with Obama strategist David Axelrod of the most popular and influential political podcasts, “Hacks on Tap.”

Murphy will join Taubman Interim Director, Professor Richard Arenberg to explore the 2020 campaign, the future of the Republican party, his perspectives on the new administration and the politics for the coming 2024 midterm elections among other issues.

Co-sponsored with USC Center for the Political Future