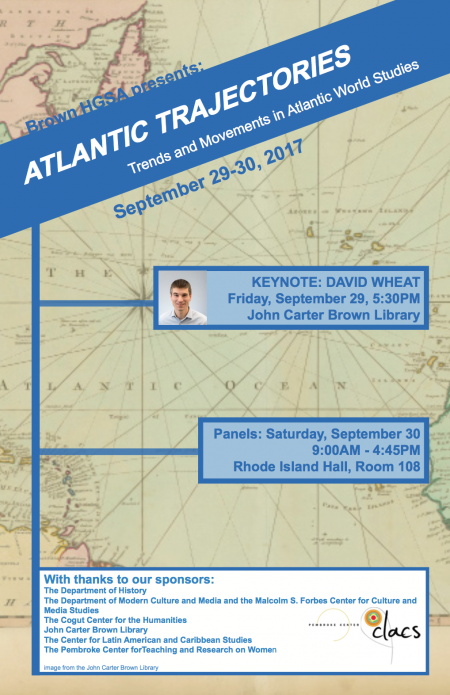 Since 2005 the graduate students in Brown University’s Department of History have held an interdisciplinary conference for graduate students working on history-related research. In previous years, the conference has featured keynote lectures from prominent scholars including Joan Scott, David Harvey, Linda Gordon, Ben Kiernan, Tamar Herzog, and Timothy Snyder. It has drawn presenters from more than forty universities and dozens of different academic disciplines, offering the Brown community a unique glimpse into the work being done across our local departments and the entire academy. This coming year the title of our conference will be “Atlantic Trajectories: Trends and Movements in Atlantic World Studies.” The Atlantic is everywhere: many departments have given the Atlantic its own field, increasing numbers of graduate students call themselves historians of the Atlantic world, and multiple roundtables and books are now dedicated to determining what the Atlantic constitutes.

The conference will highlight works that broaden current understandings of the Atlantic (and Pacific) Worlds. Focusing on trajectories, we will bring in scholars dedicated to a tranregional approach to history. “Atlantic Trajectories” is more a colloquium: a set of conversations amongst graduate students who are concerning themselves primarily with the Southern Atlantic. With keynote by David Wheat, and reception hosted at the John Carter Brown Library, we envision this as a series of presentations and discussions amongst colleagues from other schools, fellows at the John Carter Brown Library, and graduate students amongst the the university. Over the weekend of September 29-30, we hope to find ourselves in an Atlantic from a variety of time periods and frameworks that get away from its initial conceptualization as an English boundary.