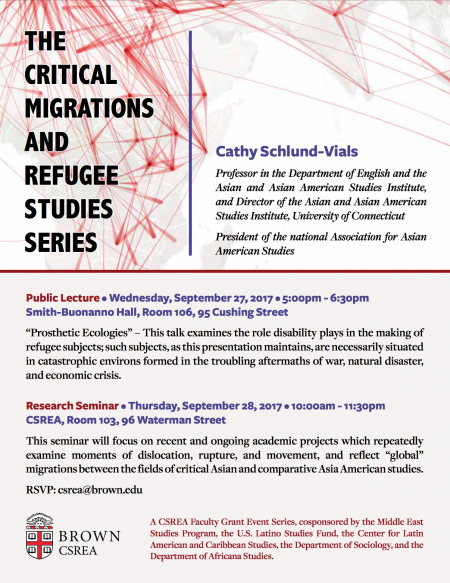 This series will dynamically consider the crucial issues of racial, ethnicity and migration in the contexts of displacement.

"Prosthetic Ecologies"
This talk examines the role disability plays in the making of refugee subjects; such subjects, as this presentation maintains, are necessarily situated in catastrophic environs formed in the troubling aftermaths of war, natural disaster, and economic crisis. To access the various man-made mechanisms responsible for bringing these disabled subjects "into being," this talk strategically utilizes the following schema: "prosthetic ecologies." "Prosthetic ecologies" operates as a flexible and generative analytic upon which to syncretically chart longue durée histories of state-sanctioned violence, state-authorized violation, and internationally-supported contravention during the Cold War era.

As a Cambodian American scholar whose work is rooted in a personal history marked by immigration, migration, and diaspora, her recent and ongoing academic projects repeatedly examine moments of dislocation, rupture, and movement. Such moments engender crucial connections between history, memory, citizenship, civil rights and human rights. Her current body of work (comprised of past and present projects) and her future research plans reflect “global” migrations between the fields of critical Asian and comparative Asia American studies. As an internationalist bridge, she consistently analyzes the possibilities, limitations, and contradictions at the forefront of civil rights, human rights, and state-authorized humanitarianism.

The Center for the Study of Race and Ethnicity in America