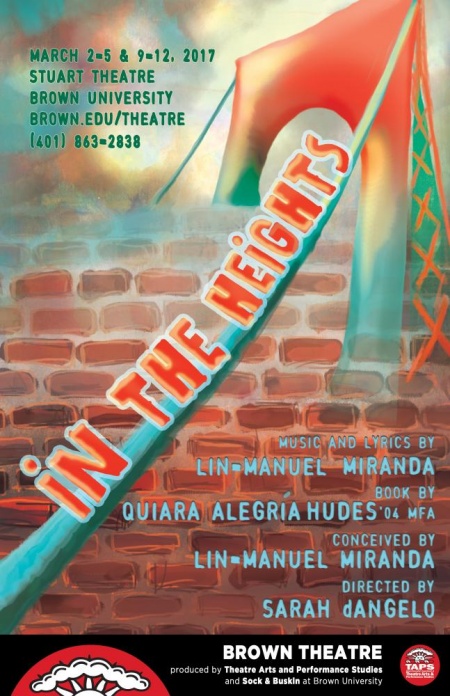 Brown University Department of Theatre Arts and Performance Studies and Sock & Buskin present their first show of the spring semester 2017. In The Heights conceived by Lin-Manuel Miranda (the man behind the Hamilton phenomenon) runs March 2 through 12 in Stuart Theatre on the main campus at Brown University.

In The Heights tells the universal story of a vibrant Cuban, Dominican, and Puerto Rican community in New York City’s Washington Heights neighborhood—a place where the coffee from the bodega is light and sweet, the windows are always open, and the streets explode with the songs and rhythms of three generations. It’s a community on the brink of change, full of hopes, dreams, and pressures, where the biggest struggles can be deciding which traditions you take with you, and which ones you leave behind. In The Heights is the winner of the 2008 Tony Awards for Best Musical, Best Score, Best Choreography, and Best Orchestrations.

The show was conceived, and the music and lyrics were written by, Lin-Manuel Miranda. Miranda is perhaps best known today as the creator of Hamilton, which won 11 Tony Awards in 2016 including Best Musical. The book for the show was written by Quiara Alegría Hudes, a Brown University alum who earned her MFA in Playwriting in 2004. Hudes won the 2012 Pulitzer Prize for Drama for her play Water by the Spoonful, which was also produced by Brown Theatre in 2013 directed by Department Chair and Associate Professor Patricia Ybarra.

This production of In The Heights is directed by Department of Theatre Arts and Performance Studies Assistant Professor Sarah dAngelo. Speaking about this production, dAngelo says:

In The Heights is an exhilarating musical with a universal message to share. It is a story of spirited celebration, great loss, profound faith and resiliency. The play centers on a close-knit Dominican, Cuban, and Puerto Rican neighborhood facing financial fallout from the encroaching corporate gentrification which is squeezing out their small businesses. The rapidly changing landscape of the neighborhood adds to the tension of an unsure future. One of the neighborhood members, “the one who made it out” Nina Rosario, returns home from her first year at Stanford University. She too has doubts about her future and questions about her place in the world. The show has great universal appeal and speaks to everyone about how we reconcile home and belonging, staying and leaving, where we come from and where we need to be.

This is a musical that has energized the whole Brown Theatre community. The show is authentically cast with a majority of Latinx student actors. Several cast members are also first generation students. The story of this show is a deeply personal one on many levels for most of the cast. The talent, generosity, and commitment of everyone involved from the cast to the production team, music director, and choreographers has been humbling and inspirational.

There couldn’t be a better time to experience this story amidst the recent executive orders from an administration that seeks to wall off and ban those who have always made America great. In The Heights is a universal story of nationhood, family, identity, and belonging. We’re very excited to welcome audiences to experience Lin-Manuel Miranda’s masterpiece of modern musical storytelling that is sure to uplift and excite audiences here at Brown University.

This year’s performance season at Brown Theatre grew out of ongoing conversations on campus at Brown University about issues of diversity and inclusion. Sock & Buskin, the student-faculty board that selects the Brown University Theatre season, wanted to represent this conversation through their choice of plays, writers, directors, and casting. The season aims to reflect the strengths and the challenges that students face in making contemporary performances that embrace diversity and can effect social change. In this moment of political change and unrest, this story reminds us of the common strength we can find in community and gives us a renewed sense of the possibility of creating a new world of hope, compassion, and joy.

In The Heights runs March 2 to 12 in Stuart Theatre on the main campus at Brown University (75 Waterman Street, Providence, RI 02912). Performances take place Thursday through Saturday at 8pm, with matinees at 2pm on Sundays. Appropriate for middle school students and above. The production at Brown Theatre features a full band of twelve musicians, all students at Brown University.

Department of Theatre Arts and Performance Studies and Sock & Buskin