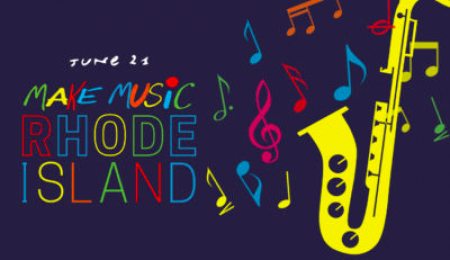 Make Music Rhode Island is an annual free, outdoor day of music held on the summer solstice, June 21st.  For Rhode Island, this is our first year. We have a good representation byour towns including Providence, East Greenwich, Westerly, Pawtucket, Cranston, Misquamicut Beach, and others! Check us out and get in touch to get involved for this years event in your own neck of the woods!

Completely different from a typical music festival, Make Music is open to anyone who wants to take part. Every kind of musician — young and old, amateur and professional, of every musical persuasion — pours onto streets, parks, plazas, and porches to share their music with friends, neighbors, and strangers. All of it is free and open to the public.

Last year, over 750 cities around the world threw city or state wide music celebrations on June 21st, and now Rhode Island joins as the 39th state as part of this international celebration.

It all started 34 years ago in France. In 1982, Jack Lang and his staff at the Ministry of Culture dreamed up an idea for a new kind of musical holiday. They imagined a day where free music would be everywhere, all around the city: street corners, parks, rooftops, gardens, and store fronts.  And, unlike a typical music festival, anyone and everyone would be invited to join and play music, or host performances. The event would take place on the summer solstice, June 21, and would be called Fête De La Musique. (In French, the name means both “festival of music” and “make music!”)

Amazingly enough, this dream has come true. The Fête has turned into a true national holiday: France shuts down on the summer solstice and musicians take over. Almost 8% of the country (5 million people) have played an instrument or sung in public for the Fête de la Musique, and 53% of the country (35 million people) comes out each year to listen.

Get involved, make music, host a performance, attend, donate, and enjoy the music and your neighbors.

Part of Make Music, presented by the NAMM Foundation