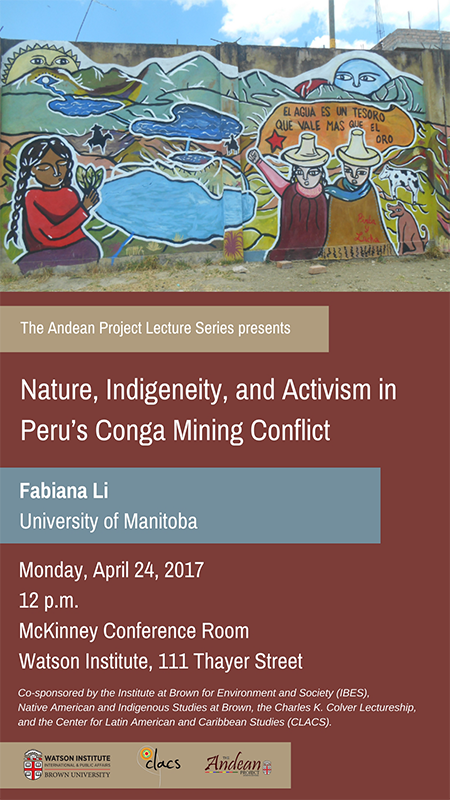 Abstract: My research on resource conflicts has focused on forms of resistance that challenge and exceed nature-culture divides, including the role of water, glaciers, and sentient mountains in campaigns against transnational mining in South America. These forms of resistance do not only involve indigenous peoples; rather, they are about the defense of local worlds threatened by the aggressive expansion of extractive activity. Grassroots opposition to mining results from a connection to local landscapes as well as linkages to national and international NGOs, solidarity activists, the media, and other actors. At times, these forms of activism invoke indigenous identity, environmentalism, and global justice. These emergent forms of activism and identity require theoretical approaches that recognize different ways of knowing and being without essentializing or romanticizing indigenous knowledge. This paper follows from my research on communities surrounding the Yanacocha mine in Northern Peru, focusing on the most recent controversies around the Conga Mining Project. Campesinos calling themselves ‘Guardians of the Lagoons’ have organized in defense of water resources, protesting against the project’s incursion on their land and the mining company’s proposal to replace the lagoons with artificial reservoirs. Campaigns against the Conga mine can elucidate how people relate to local landscapes, including connections that have been crucial in mobilizing communities against the mining company. I emphasize the importance of these relationships while recognizing that they are fluid, unstable, and always in the making.