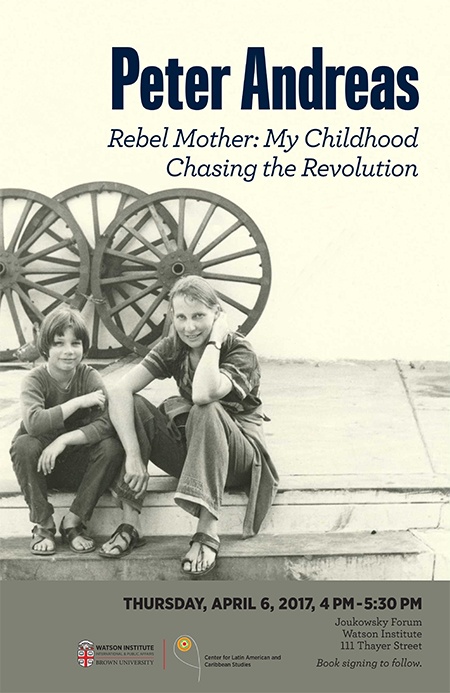 Carol Andreas was a traditional 1950s housewife from a small Mennonite town in central Kansas who became a radical feminist and Marxist revolutionary. From the late sixties to the early eighties, she went through multiple husbands and countless lovers while living in three states and five countries. She took her youngest son, Peter, with her wherever she went, even kidnapping him and running off to South America after his straitlaced father won a long and bitter custody fight.

They were chasing the revolution together, though the more they chased it the more distant it became. They battled the bad “isms” (sexism, imperialism, capitalism, fascism, consumerism), and fought for the good “isms” (feminism, socialism, communism, egalitarianism). They were constantly running, moving, hiding. Between the ages of five and eleven, Peter attended more than a dozen schools and lived in more than a dozen homes, moving from the comfortably bland suburbs of Detroit to a hippie commune in Berkeley to a socialist collective farm in pre-military coup Chile to highland villages and coastal shantytowns in Peru. When they secretly returned to America they settled down clandestinely in Denver, where his mother changed her name to hide from his father.

This is an extraordinary account of a deep mother-son bond and the joy and toll of growing up with a radical mother in a radical age.

Read an interview with Peter about the book, here.

Co-sponsored by the Center for Latin American and Caribbean Studies.