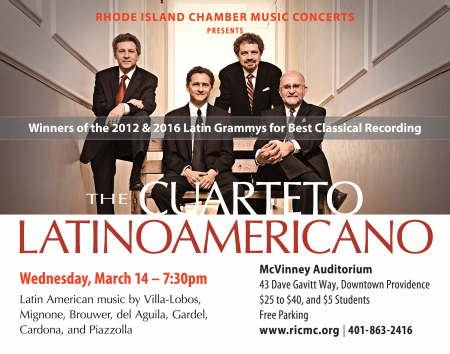 Cuarteto Latinoamericano is a world-renowned, multi-Latin Grammy winning string quartet from Latin America. They have toured extensively in Europe, the Americas, Israel, China, Japan and New Zealand. The recipient of a Mexican Music Critics Association award in 1983 and "most adventurous programming" awards from CMA/ASCAP in 1997, 1999 and 2000, the group has introduced more than a hundred works written for them and has participated in over a hundred world premieres.

Formed in Mexico in 1981, Cuarteto Latinoamericano was, from 1987 until 2008, quartet-in-residence at Carnegie Mellon University in Pittsburgh. They have collaborated with many artists including cellists János Starkerand Yehuda Hanani, pianists Santiago Rodriguez, Cyprien Katsaris, Itamar Golan and Rudolph Buchbinder, tenor Ramón Vargas, and guitarists Narciso Yepes, Sharon Isbin, David Tanenbaum and Manuel Barrueco. With Barrueco, they have played in some of the most important venues of the USA and Europe, have recorded two cds, and commissioned guitar quintets from American composers Michael Daugherty and Gabriela Lena Frank. The work by Frank, Inca Dances, won a Latin Grammy in 2009 for Best New Latin Composition.

Under the auspices of the Sistema Nacional de Orquestas Juveniles of Venezuela, the Cuarteto has created the Latin American Academy for String Quartets, based in Caracas, which serves as a training ground for five select young string quartets from the Sistema. The Cuarteto visits the Academy four times a year. The Cuarteto Latinoamericano is represented by Sue Endrizzi Morris and Don Osborne, at California Artists Management.