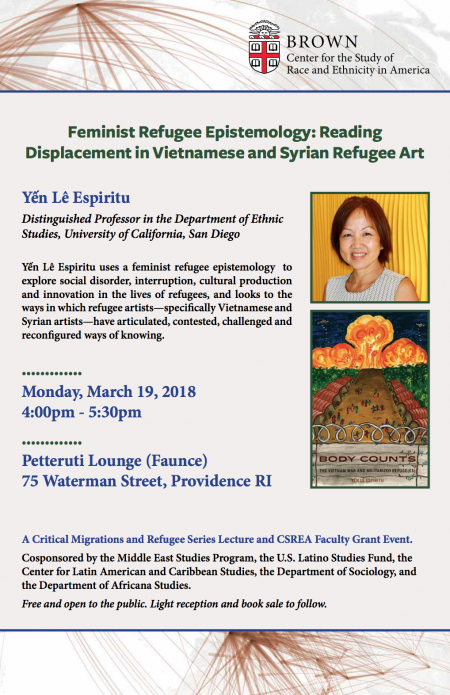 Joining the fields of transnational feminist studies with critical refugee studies, this talk introduces the concept feminist refugee epistemology (FRE) to re-conceptualize war-based displacement as not only about social disorder and interruption but also about social reproduction and innovation. FRE does more than critique Western media representation of refugees; it underlines the refugees’ rich and complicated lives, the ways in which they enact their hopes, beliefs, and politics, even when they live militarized lives. Given the ubiquity of visual representation of refugee suffering in Western media, it examines how refugee artists—specifically Vietnamese and Syrian artists—have articulated, contested, challenged and reconfigured ways of knowing. Fusing the critical with the creative, it conceptualizes refugee artwork as a critical site of knowledge production and encourages further and deeper inquiry into refugee cultural production as an essential element in refugee studies.

Free and open to the public. Light reception and book sale to follow the lecture.

Yến Lê Espiritu is a Distinguished Professor in the Department of Ethnic Studies at the University of California, San Diego. She has published extensively on Asian American identities and politics, gender and migration, and U.S. colonialism and wars in Asia. Her most current book, "Body Counts: The Vietnam War and Militarized Refuge(es)" (UC Press, 2014) charts an interdisciplinary field of critical refugee study, which reconceptualizes “the refugee” not as an object of rescue but as a site of social and political critiques. In 2015, she received the UCSD Academic Senate Faculty Research Lecturer Award. Learn more >>

The Critical Migration and Refugee Studies Series dynamically considers the crucial issues of racial, ethnicity and migration in the contexts of displacement. A CSREA Faculty Grant Event organized by Kevin Escudero, Assistant Professor of American Studies. This series is supported by the Middle East Studies Program, the U.S. Latino Studies Fund, the Center for Latin American and Caribbean Studies, the Department of Sociology, and the Department of Africana Studies.

A Critical Migrations and Refugee Series Lecture and CSREA Faculty Grant Event.Co-sponsored by the Middle East Studies Program, the U.S. Latino Studies Fund, the Center for Latin American and Caribbean Studies, the Department of Sociology, andthe Department of Africana Studies.