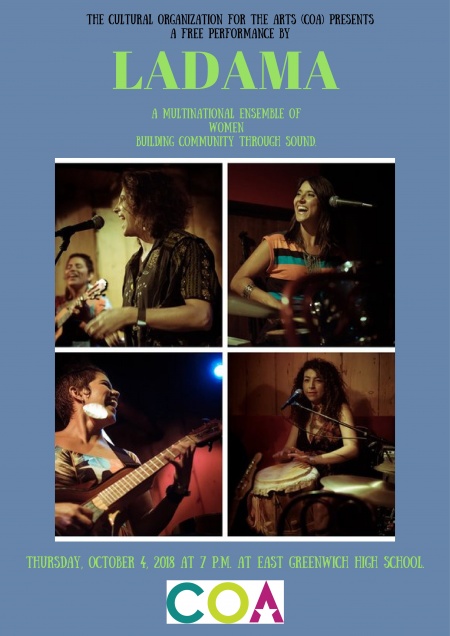 COA is proud to present Ladama, the Pan-Latin Folk Quartet of Women Musicians, to East Greenwich! This concert is a "free or donate-what-you-wish" event. Reserve your ticket in advance and you will be entered into a drawing to win a Ladama debut album CD or Condesa restaurant gift card for dinner for two! (You must reserve a ticket in advance and be present the night of the concert to win).

Ladama has performed at Brown University through CLACS and is returning to Providence in October. The group is currently on their world tour and we are so excited to have them on stage in East Greenwich. Please join us and be ready to feel the rythyms and dance!

LADAMA is an ensemble of women musicians from across the Americas who, as well as performing as a touring band, strive to engage youth in their respective communities in the process of music-making, composition and audio production through collaboration and performance workshops.They are Mafer Bandola (Venezuela), Lara Klaus (Brazil), Daniela Serna (Colombia) and Sara Lucas (U.S.). With rhythm and percussion driving their original compositions sung in Spanish, Portuguese and English they combine disparate, traditional roots music with pop. The result is a sonic experience through which we can view our future as a world that communicates across continents and cultures, with sound and story. LADAMA has performed at TED, the Skoll World Forum, on ESPN, and at dozens of prestigious venues and festivals around the world. In January 2018 they were featured on NPR's All Things Considered which praised their "irresistible spirit and universal appeal." Their self-titled debut album (released on Six Degrees Records, 2017,) reached #1 on both iTunes and Amazon's Latin Music Charts.