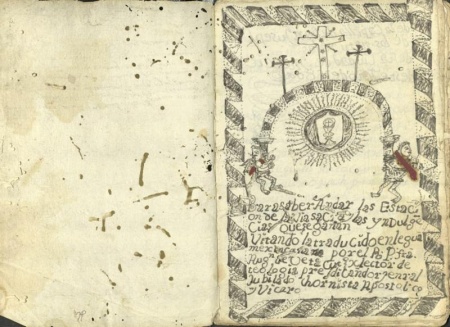 In 1680, Fr. Agustin de Vetancurt, an important member of the Franciscan Order in Mexico, published a little book of prayers and meditations of the Stations of the Cross, with Francisco Rodriguez Lupercio, a Mexico City printer. The little eleven-page book was written in Nahuatl, the Aztec language, not Spanish. It must have been very popular because Vetancurt noted that it had been reprinted various times. It was so popular that no copies of it are known to exist. But in the village of Chicahuastla, some three hundred miles away, a scribe named Matheo de San Juan laboriously copied the entire book onto twenty-eight leaves of paper. The manuscript copy ended up in the hands of the Academy of American Franciscan History. This talk will look at the manuscript, other works by Vetancurt, and the curious illustrations that were added to the devotion.