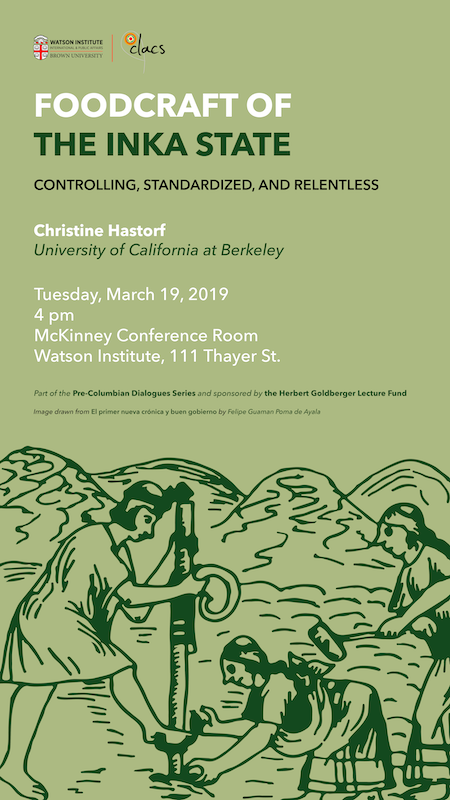 As the Inka conquered their way across the western side of the South American continent in the fifteenth century, they highlighted generosity through public eating in their conquest arsenal. All highland people produced a range of similar products, but the Inka refined state eating to several very specific highland meals and drinks. This is clearly illustrated in the ceramics that are specifically Inkaic, in the shifts in plant frequencies in the archaeobotanical record found in Inka and local settlements, and in the early colonial records. The ideology that the Inka promulgated in their food presentation was transformative and spiritually based. In some settings eating was a sign of membership, in others it was a sign of conquest, in others a sign of torture. This talk will discuss how the Inka first created their state dishes from highland products and then manipulated them as agents of ideological and economic control.

Christine Hastorf is Professor with the Department of Anthropology at the University of California at Berkeley, and a Fellow with both the California Academy of Sciences and the Society of Antiquities. She is also the Director of the McCown Archeobotany Laboratory and Curator of South American Archaeology at the P.A. Hearst Museum of Anthropology at UC Berkley. She received her degrees from Stanford University and UCLA (Ph.D.), and her research interests are the archaeology of political structures and social relations, paleobotany and macrobotanical remains, food and foodways, prehistoric agricultural systems, and the Andean Region of South America; she is the Director of the Taraco Archaeological Project in Bolivia. Professor Hastorf has received numerous awards for her work, including the 2012 Fryxell Award for Excellence in the Botanical Sciences in Archaeology from the Society of American Archaeology, and has published extensively.