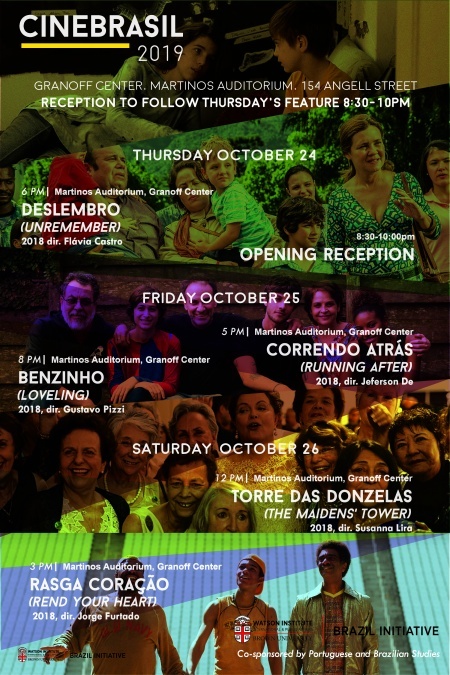 The films will all be subtitled. Seating is first-come, first-serve.

CineBrasil is an annual film festival that highlights some of the best works in recent Brazilian cinema. CineBrasil this year will include documentaries and feature length films of great artistic quality, some of which are virtually unknown outside of Brazil and touch on subjects such as dictatorship, gender, intergenerational discord, family, sports and political prisoners.

Co-sponsored by Brazil Initiative and Portuguese and Brazilian Studies

In 1979 a teenage girl emigrates back to Brazil from Paris, plunging her into the political and social storm of that country, and forcing her to confront the disappearance of her father many years earlier.

Paulo Gale is a black Brazilian man, a typical "day-by-day survivor", always doing his best to bring some happiness in his life, and by happiness he means money. When finding himself a dead end, he discovers the opportunity to become a football manager by leading some boy from the neighborhood to becoming the new Neymar of international soccer. Going through the suburbs of Rio, he finds Glanderson, a young boy with an enormous talent for soccer given the absence of two toes in his right foot. With good humor, high hopes, and a lot of missteps the quixotic duo tries their best to get to their dream to come true.

Irene, 38 years old, is married to Klaus, 45. They live in Petrópolis, a small city on the outskirts of Rio de Janeiro, and have four children. Fernando (16); Rodrigo (10), and twins (5). The couple has been struggling for years to finish building their new house. Irene works as an independent seller while finishing her studies to get her high-school diploma. Klaus runs a small copy shop where he also sells books. Fernando, their eldest son, plays handball. After being the highlight of the season, the boy is invited to join a professional team in Germany and will leave his parents house much sooner than expected. Among the everyday issues of their family's life, Irene will have to deal with the early separation from Fernando and adapt to a new life without him.

There are desires that not even the torture or imprisonment can restrain, freedom and justice. There are reasons that keep us on the righteous path even in circumstances of extreme pain and humiliation, friendship and solidarity. MAIDEN’S TOWER brings surprising never seen before accounts from former president Dilma Rousseff and her former cellmates from Tiradentes prison in São Paulo. They were imprisoned together in the 70’s at the Maiden’s Tower, the name used to refer to the female cells in the prison. The film recreates from fragments of memory of each one of them, a film set that resembles the space in which they were incarcerated together. In this environment they reunite 45 years afterwards in order to break the silence and the fear in talking about the horrors of living under a violent dictatorship. Maiden’s Tower is an collective memory exercise done by women that believe that to resist is the only way to be free.

Rasga Coração (Rend Your Heart) is an adaptation of the homonymous play (1972) by Oduvaldo Viana Filho, which tells the story of Manguari Pistolão [Big Pistol], an anonymous militant who, after forty years of struggle for what he considers to be new and revolutionary, sees his son Luca accuse him of being conservative, old-fashioned, anachronistic. Unable to make ends meet, suffering from the pains of chronic arthritis, and in a growing conflict with Luca, Big Pistol reviews his past, and finds himself repeating the same attitudes as his father. Integrating fragments from various moments of Big Pistol’s life, the film casts light on forty years of Brazilian political life, showing the recurrent conflict between the perceptions of what is truly new.