Jonathan Rosa - Looking like a Language, Sounding like a Race: Raciolinguistic Ideologies and the Learning of Latinidad 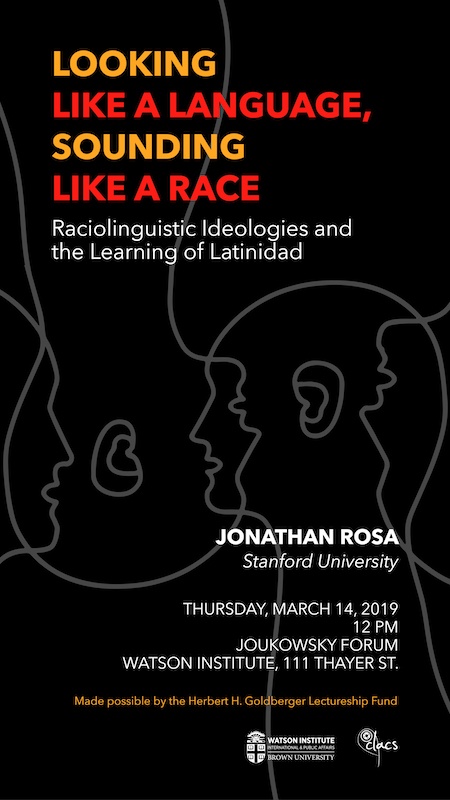 Jonathan Rosa's book, Looking like a Language, Sounding like a Race: Raciolinguistic Ideologies and the Learning of Latinidad, examines the emergence of linguistic and ethnoracial categories in the context of contemporary U.S. constructions of Latinidad. The book draws from more than twenty-four months of ethnographic and sociolinguistic fieldwork to analyze the racialization of language as a central form of modern governance. It focuses specifically on youth socialization to U.S. Latinidad as a contemporary site of political anxiety, “raciolinguistic” transformation, and urban inequity. Rosa’s account studies the fashioning of Latinidad in a highly segregated Chicago high school whose student body is more than 90% Mexican and Puerto Rican. Rosa shows how anxieties surrounding language, race, and identity produce an administrative project that seeks to transform "at risk" Mexican and Puerto Rican students into "young Latino professionals." This institutional effort, which requires students to learn to be – and sound like – themselves in highly studied ways, reflects administrators’ attempts to navigate a precarious urban terrain in the city grappling with some of the nation’s highest youth homicide, dropout, and teen pregnancy rates. Rosa explores the ingenuity of his research participants’ creative responses to these forms of marginalization through the contestation of political, ethnoracial, and linguistic borders. The detailed engagement with the relationship between linguistic and ethnoracial category-making that develops throughout the book points to the raciolinguistic, historical, political, and economic dynamics through which people come to look like a language and sound like a race across cultural contexts.

Jonathan Rosa is Assistant Professor in the Graduate School of Education, Center for Comparative Studies in Race and Ethnicity, and, by courtesy, Departments of Anthropology and Linguistics at Stanford University. His research combines sociocultural and linguistic anthropology to study the co-naturalization of language and race as a key feature of modern governance. Specifically, he analyzes the interplay between racial marginalization, linguistic stigmatization, and educational inequity. Dr. Rosa is author of the book, "Looking like a Language, Sounding like a Race: Raciolinguistic Ideologies and the Learning of Latinidad." In addition to his formal scholarly research, Dr. Rosa is an ongoing participant in public intellectual projects focused on race, education, language, youth, (im)migration, and U.S. Latinxs. His work has appeared in scholarly journals such as the Harvard Educational Review, American Ethnologist, American Anthropologist, and the Journal of Linguistic Anthropology, as well as media outlets such as MSNBC, NPR, CNN, and Univision.