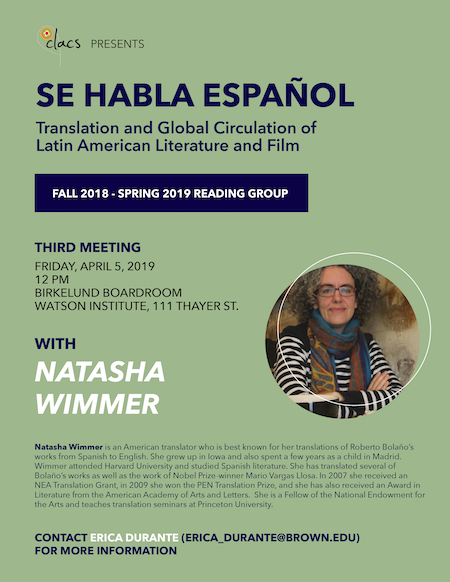 Natasha Wimmer is an American literary translator who is best known for her translations of Roberto Bolaño’s works from Spanish to English. She grew up in Iowa and also spent a few years as a child in Madrid. Wimmer attended Harvard University and studied Spanish literature. After college she began to work for Farrar, Straus, & Giroux, as an assistant and later as a managing editor, where she happened upon Bolaño’s Savage Detectives. Bolaño’s translator was too busy at the time to work on this project and Wimmer was thrilled to take it on herself. Her translation was incredibly well-received. She has since gone on to translate several of Bolaño’s works as well as the work of Nobel Prize-winner Mario Vargas Llosa. In 2007 she received an NEA Translation Grant, in 2009 she won the PEN Translation Prize, and she has also received an Award in Literature from the American Academy of Arts and Letters. Her translation of Bolaño’s 2666also won the National Book Award’s Best Novel of the Year. She is a Fellow of the National Endowment for the Arts and taught translation seminars at Princeton University.

Part of the CLACS Reading Group on Translation