Storytelling for Social Justice in Medicine: Lessons from the Border 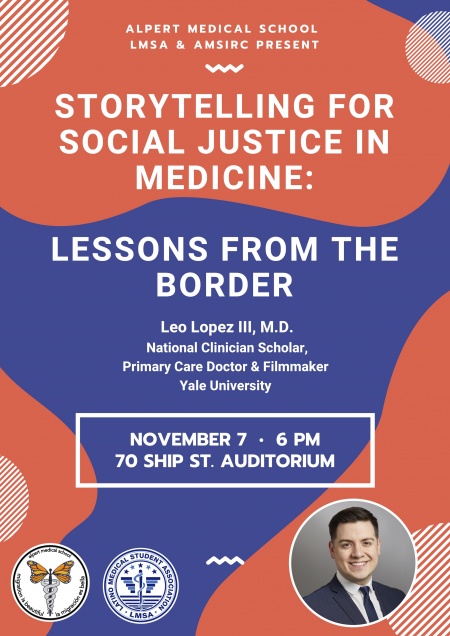 LMSA (Latinx Medical Student Association) and AMSIRC (Alpert Medical School Immigrant Rights Coalition) invite you to attend our upcoming event with Dr. Leo Lopez from Yale University on Thursday, November 7th at 6pm at the 70 Ship St auditorium. He will be speaking about the creation of a documentary series that captures the intersection of medicine and social justice.

Leo Lopez III, M.D. is a National Clinician Scholar, primary care doctor, and film-maker at Yale University. He received his undergraduate degree in biomedical science at Texas A&M University, and medical degree from University of Texas School of Medicine San Antonio. In 2019, Dr. Lopez was named Young Physician of the Year by the National Hispanic Medical Association. As a resident, spent three years on the Board of Directors for Texas Doctors for Social Responsibility, advocating for policies to improve healthcare for marginalized communities. He founded and served as president for the non-profit organization “Salud, Su Derecho” which aimed to reduce health disparities in communities along the Texas-Mexico border. Recognized for his policy and clinical work amongst homeless populations and in global health settings as a resident, he earned the distinction of 2017 and 2018 National Resident of the Year from the National Hispanic Medical Association in Washington D.C. In 2017, he was named among 12 elite graduates over the past decade by Texas A&M University’s “12 Under 12” Alumni Award Program for his contributions to business, civic service and philanthropy. As a medical student, he received the 2015 Excellence in Public Health Award from the U.S. Public Health Service. Leo’s work as an investigative journalist focused on health disparities in medically under-served communities, and he subsequently shared his work at TEDx.  As CEO of El Renovatio Films L.L.C., Leo directed and produced documentaries on healthcare policy, social justice, and human rights in the Middle East, Japan, and the United States.