BEYOND BORDERS: LIFE IN THE MIDDLE SPACE 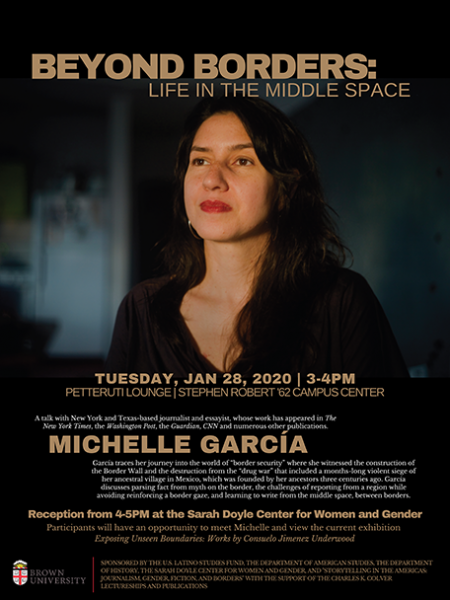 Journalist and essayist Michelle García was born and raised in the chaparral between San Antonio and the Rio Grande River. To her people, the region was the northern reaches of Mexico where their ranches predated borders. Known as the “Nueces Strip, her birthplace was the pretext for the 1846 war between the U.S. and Mexico. The war ended with the U.S. annexing most of the western states and from her birthplace came mythology, with tales and symbols of Mexican “bandits” and heroic lawmen and an untamed frontier. A border gaze formed and hardened. García traces her journey into the world of “border security” where she witnessed the construction of the Border Wall and the destruction from the “drug war” that included a months-long violent siege of her ancestral village in Mexico, which was founded by her ancestors three centuries ago. García discusses parsing fact from myth on the border, the challenges of reporting from a region while avoiding reinforcing a border gaze, and learning to write from the middle space, between borders.

Michelle García is a New York and Texas-based journalist and essayist and a current Soros Equality Fellow.  Her work has appeared in the Washington Post, New York Times, Oxford American, Guernica, The Texas Observer, Columbia Journalism Review, The Atlantic’s Quartz, Insight Crime, NACLA, the Baffler, Salon, The Nation, AlJazeera America, among other publications. García is working on a non-fiction book about borders and their powerful influence on U.S. identity, politics and culture of violence. www.michellegarciainc.com/ @pistoleraprod

Following the public talk please join us for a reception at the Sarah Doyle Center for Women and Gender. Participants will have an opportunity to meet Michelle and view the current exhibition Exposing Unseen Boundaries: Works by Consuelo Jimenez Underwood

SPONSORED BY THE U.S. LATINO STUDIES FUND, THE DEPARTMENT OF AMERICAN STUDIES, THE DEPARTMENT OF HISTORY, THE SARAH DOYLE CENTER FOR WOMEN AND GENDER, AND THE CLACS LECTURE SERIES "STORYTELLING IN THE AMERICAS: JOURNALISM, GENDER, FICTION, AND BORDERS" WITH THE SUPPORT OF THE CHARLES K. COLVER LECTURESHIPS AND PUBLICATIONS.