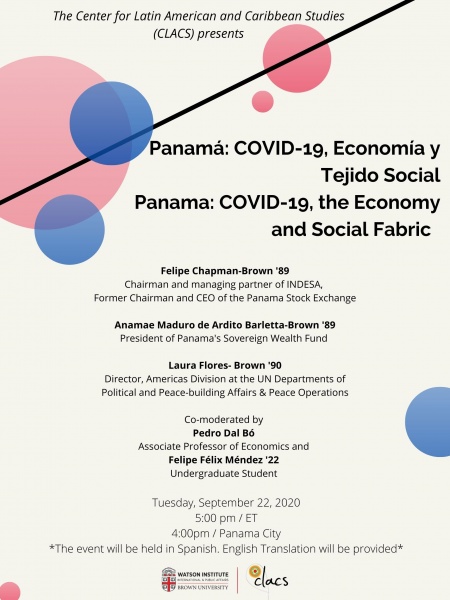 This event will be held in Spanish. English translation available.

CLACS brings together Brown Alumni and leading voices of the financial sector of Panama for a panel discussion moderated by Brown Economics Prof. Pedro dal Bo. This insightful event will provide the public with the knowledge to understand Panama's economic situation, its impact in the region, and the global financial environment while discussing the impact of current forces like the Covid-19 pandemic.

Pedro Dal Bó - Joined Brown University in 2002 and the Population Studies and Training Center (PSTC) in 2010. He is an applied theorist and economic experimentalist with a primary interest in the political economy.

Laura Flores '90 - Director of the Americas Division of the Departments of Political and Peacebuilding Affairs &amp; Peace Operations at the United Nations. She previously served as Panama’s Ambassador to the UN, Assistant Representative to the UN Population Fund in Panama, and Panamanian Vice Minister of Trade and Industry. Ms. Flores holds an MBA from Haas School of Business at the University of California, Berkeley.

Anamae Maduro de Ardito Barletta Barletta '89 - President of the Board of Directors of Panama’s sovereign wealth fund (unanimously elected), a founding member of the Panamanian Association of Securities Dealers, and a member of the Board of Prival Investment Funds. Mrs. Maduro de Ardito Barletta has extensive professional experience in the banking and financialsector, specializing in economics and investment banking.

Felipe Chapman '89 - Managing Partner and the Chairman of the Board of Directors at INDESA, a Panamanian firm that specializes in economic research and analysis, financial and strategic advisory, investment banking services, and private equity investments. Mr. Chapman is independent director of Banistmo and previously served as chairman and CEO of the Panama Stock Exchange, as well as chairman of Latinex Holdings and Latin Clear. Mr. Chapman holds an MBA from INCAE Business School.