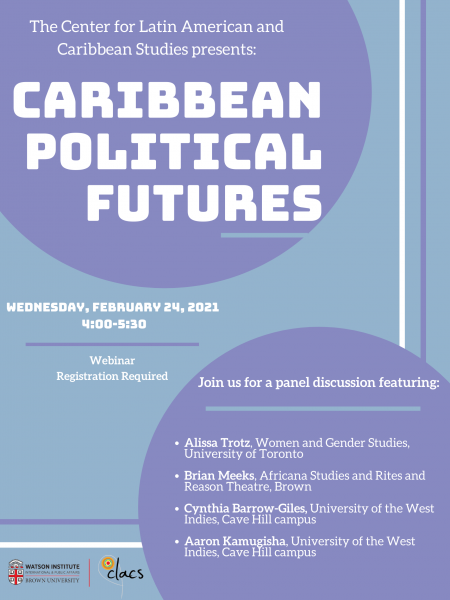 A roundtable conversation with experts to discuss the political future of the Caribbean.

Alissa Trotz is a Professor of Caribbean Studies at New College and the Director of Women and Gender Studies. She is also affiliated faculty at the Dame Nita Barrow Institute of Gender and Development Studies at the University of the West Indies, Cave Hill, Barbados.

Cynthia Barrow-Giles is a graduate of the Consortium Graduate School, Mona Jamaica. She served as Deputy Dean of the Faculty of Social Sciences from 1994-1996, UWI, Cave Hill campus, and is a former Head of Department of Government, Sociology and Social Work at the Cave Hill campus, 2004-2006.

Aaron Kamugisha is a professor of Cultural Studies at The University of the West Indies, Cave Hill Campus. He did his Ph.D. Social and Political Thought at York University in Toronto, and was the 2007/8 Postdoctoral fellow in the Department of African-American Studies at Northwestern University.