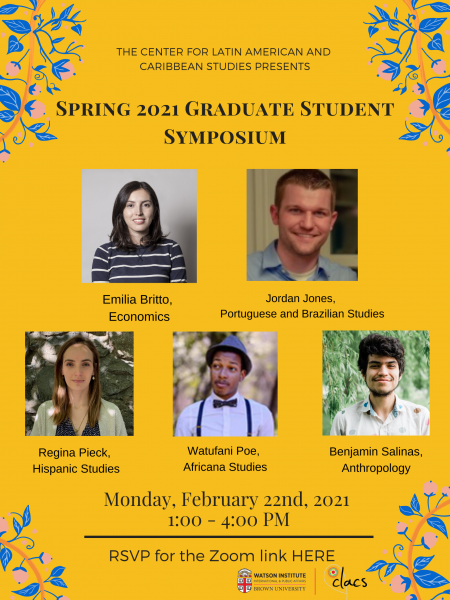 The following students will participate in the Symposium:

Watufani Poe - earned his B.A. from Swarthmore College in Africana Studies with a minor in Latin American Studies. Prior to pursuing graduate school, Watufani spent two years in the San Francisco Bay Area as an Americorps member, working with various LGBTQ activist organizations whose main goals were to educate and to promote youth activism, especially among the youth of color. His research interests include the African diaspora in Latin America, Brazil's Black social and political movements, Black queer theory, Black Transnationalism, and intersectionality.

Emilia Brito - is a Ph.D. student in the Economics Department. She specializes in public economics and labor economics. Her research uses applied microeconomics methods to study gender inequalities in education, labor markets, and health. Her current projects include gender differences in educational expectations, role-model effects in male-dominated fields in academia, and sexual harassment in universities and in work environments. She holds a Master's and Bachelor's degree in Economics from Universidad de Chile.

Jordan Jones - is a PhD student in Portuguese & Brazilian Studies and an MA student in Hispanic Studies. Originally from Texas, he received a BA in English and Portuguese from Brigham Young University in 2014. He also completed an MA in Luso-Brazilian Literatures at BYU (2015) and an MEd in secondary English education at Johns Hopkins University (2017). His research interests include contemporary literature and human rights, translation and comparative studies, and reader-response theory.

Regina Pieck - is a Ph.D. student in Hispanic Studies at Brown University. She is from Mexico, D.F. She has studied at el Instituto Tecnológico Autónomo de México (ITAM), Harvard University, and Boston College. Her interests include 20th-century and contemporary Latin American literature (fiction and poetry), the literature and cinema of the Mexican Revolution, borderlands, and literary theory.

Ben Salinas - is a graduate student in the Anthropology department at Brown University. His interests lie in representations of Indigenous identity through hip hop. Specifically, he is interested in the use of indigenous or native languages in rap, as well as representations of environment/human relationships in video and sound. Ben graduated with a Bachelor of Arts in Anthropology from Cornell University in 2018 where he studied with ethnomusicologist Catherine Appert as a Mellon-Mays Fellow. At Brown, he hopes to expand his research to look at the politics of indigenous language rap movements and its effects across Latin America.