"Conspiracy and Compromise: A Comparative Look at Slavery in Cuba and the United States, 1840-1850" 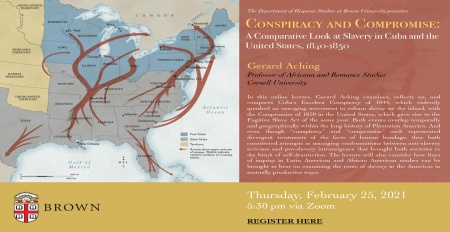 Please join the Department of Hispanic Studies for a lecture by Professor Gerard Aching (Cornell University) entitled, “Conspiracy and Compromise: A Comparative Look at Slavery in Cuba and the United States, 1840-1850”.

Abstract:
In this online lecture, Gerard Aching examines, reflects on, and compares Cuba’s Escalera Conspiracy of 1844, which violently quashed an emerging movement to reform slavey on the island, with the Compromise of 1850 in the United States, which gave rise to the Fugitive Slave Act of the same year. Both events overlap temporally and geographically within the long history of Plantation America. And even though “conspiracy” and “compromise” each represented divergent treatments of the facts of human bondage, they both constituted attempts at managing confrontations between anti-slavery activism and pro-slavery intransigence that brought both societies to the brink of self-destruction. The lecture will also consider how lines of inquiry in Latin American and African American studies can be brought to bear on examining the roots of slavery in the Americas in mutually productive ways.

Biography:
Gerard Aching is professor of Africana and Romance Studies at Cornell University. He specializes in 19th- and 20th-century Caribbean literatures and intellectual histories, theories of modernism and modernity in Latin America, and colonial literatures and slavery in the Caribbean. His most recent book is “Freedom from Liberation: Slavery, Sentiment, and Literature in Cuba” (Indiana, 2015). Aching’s current research and teaching focus on subjectivity in slave narratives, slavery and philosophy, and sugar and the modern transatlantic world. His Underground Railroad Project, which entails field work in Central New York, includes a book project that is tentatively titled, “The Promise of Rebirth”.