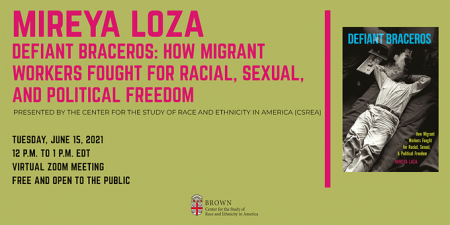 In Defiant Braceros, Mireya Loza sheds new light on the private lives of migrant men who participated in the Bracero Program (1942–1964), a binational agreement between the United States and Mexico that allowed hundreds of thousands of Mexican workers to enter this country on temporary work permits. While this program and the issue of temporary workers has long been politicized on both sides of the border, Loza argues that the prevailing romanticized image of braceros as a family-oriented, productive, legal workforce has obscured the real, diverse experiences of the workers themselves. Focusing on underexplored aspects of workers’ lives–such as their transnational union-organizing efforts, the sexual economies of both hetero and queer workers, and the ethno-racial boundaries among Mexican indigenous braceros–Loza reveals how these men defied perceived political, sexual, and racial norms.

Basing her work on an archive of more than 800 oral histories from the United States and Mexico, Loza is the first scholar to carefully differentiate between the experiences of mestizo guest workers and the many Mixtec, Zapotec, Purhepecha, and Mayan laborers. In doing so, she captures the myriad ways these defiant workers responded to the intense discrimination and exploitation of an unjust system that still persists today.

Mireya Loza ’06 A.M. ’11 Ph.D., is an associate professor in the Department of History and the American Studies Program at Georgetown University. Her areas of research include Latinx history, social movements, labor history and food studies. Her first book, Defiant Braceros: How Migrant Workers Fought for Racial, Sexual and Political Freedom (University of North Carolina Press, 2016), examines the Bracero Program and how guest workers negotiated the intricacies of indigeneity, intimacy, and transnational organizing. Defiant Braceros won the 2017 Theodore Saloutos Book Prize, awarded by the Immigration and Ethnic History Society and the Smithsonian Secretary’s Research Prize. She is currently carrying out research for her second book project tentatively titled, The Strangeness and Bitterness of Plenty: Making Food and Seeing Race in the Agricultural West, 1942-1965. Her research has been funded by the Ford Foundation, the Mexico-North Research Network, the National Endowment for the Humanities, and she was also named a Distinguished Lecturer by the Organization of American Historians. Prior to joining the faculty at Georgetown, she was a curator at the Smithsonian Institution’s National Museum of American History and an assistant professor in food studies at New York University.