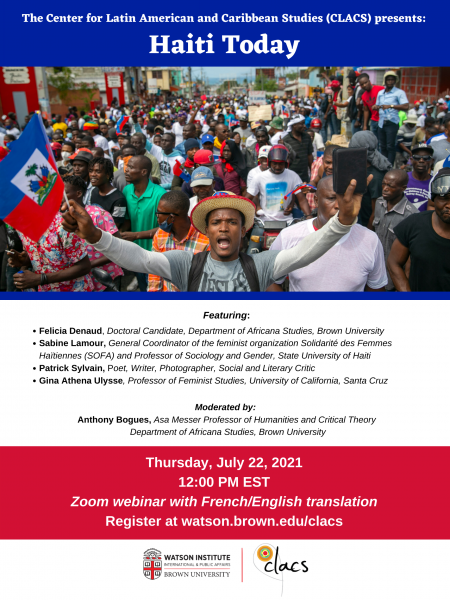 French-English interpretation will be provided.

The Center for Latin American and Caribbean Studies presents a discussion about the current political situation in Haiti.

Felicia Bernard-Denaud, a rising 6th year doctoral candidate in Africana Studies at Brown University. She is currently writing her dissertation "At the Vanishing Point of the Word: Blackness, Imperium, and the Unnameable War." Her project offers the concept of "unnameable war" to express the relationship between Blackness and the State/Master ‘s capacity to wage war. Felicia  previously co - facilitated the Carceral State Reading Group out of the Center for the Study of Slavery and Justice and was a fellow with the Black Feminist Theory Project out of the Pembroke Center at Brown University.

Patrick Sylvain, a Haitian-American poet, writer, photographer, social and literary critic who has published widely on Haitian, Haitian diaspora culture, politics, language, and religion. He is the author of several poetry books in English and Haitian, and his poems have been nominated for the prestigious Pushcart Prize. Sylvain has degrees from the University of Massachusetts (B.A.), Harvard University (Ed.M.), and Boston University (MFA). Sylvain is a lecturer at Brown University’s Africana Studies. He is also the Shirle Dorothy Robbins Creative Writing Prize Fellow at Brandeis University where he is completing his PhD in English. Sylvain’s poetry chapbook, Underworlds, is published by Central Square Press (2018). His new bilingual poetry collection Unfinished Dreams /Rèv San Bout will be published by JEBCA Editions (October 2021). He is the leading author of the forthcoming book Education Across Borders: Immigration, Race, and Identity in the Classroom to be published by Beacon Press (February 2022).

Gina Athena Ulysse, currently Professor of Feminist Studies at the University of California, Santa Cruz. She is a Haitian-American multidisciplinary artist-scholar whose research and art practice engage geopolitics, historical representations, and the dailiness of Black diasporic conditions to confront the visceral absent in structural analysis. In addition to creative and long-form non-fiction writing in various journals, she is the author of Downtown Ladies (2008), an ethnography of Informal Commercial Importers in Jamaica, Why Haiti Needs New Narratives (2015) a collection of short-form essays on media representation of the 2010 earthquake, and Because When God is too Busy: Haiti, me & THE WORLD (2017)—a collection of photographs, poetry, and performance texts. She was the invited editor of "Caribbean Rasanblaj," a double issue of e-misférica, NYU's Hemispheric Institute for Performance and Politics Journal. In 2020, Ulysse was an invited artist at the Biennale of Sydney in Australia, where she presented her performance installation, An Equitable Human Assertion on Cockatoo Island. For more information:ginaathenaulysse.com