What's Happening in the World? Charting a Way Forward 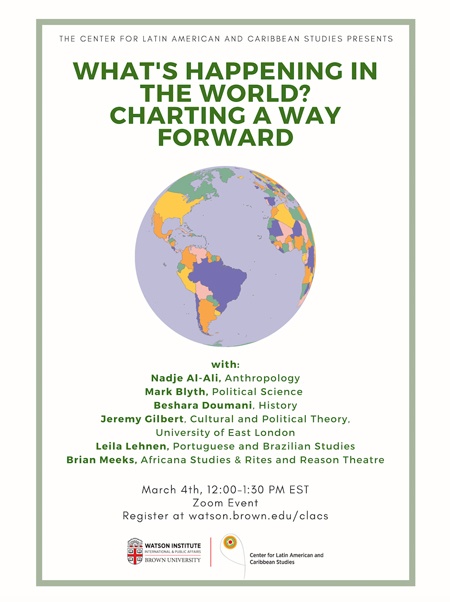 This panel includes the following speakers:

Nadje Al-Ali - is Robert Family Professor of International Studies and Professor of Anthropology and Middle East Studies. Her main research interests revolve around feminist activism and gendered mobilization, with a focus on Iraq, Egypt, Lebanon, Turkey and the Kurdish political movement.

Mark Blyth - is a political economist whose research focuses upon how uncertainty and randomness impact complex systems, particularly economic systems, and why people continue to believe stupid economic ideas despite buckets of evidence to the contrary.

Beshara Doumani - is ta Mahmoud Darwish Professor of Palestinian Studies, the first chair of its kind dedicated to this field of study. He is also the founding director (2012-2018) of Brown's Center for Middle East Studies (CMES), and founder of New Directions for Palestinian Studies, a CMES initiative since 2012. From 2012-2020 he was the Joukowsky Family Distinguished Professor of Modern Middle East History.

Jeremy Gilbert - Cogut Institute as Visiting Professor of Humanities for the Spring of 2020. He is Professor of Cultural and Political Theory at the University of East London.

Leila Lehnen - was born in Paris, France and grew up in Brazil, Germany, and India. She studied German literature at the Eberhard-Karls Universität, in Tübingen (Germany). She came to the United States on a study abroad program and completed a Masters in Comparative Literature at the University of Washington in Seattle and a PhD at Vanderbilt University.