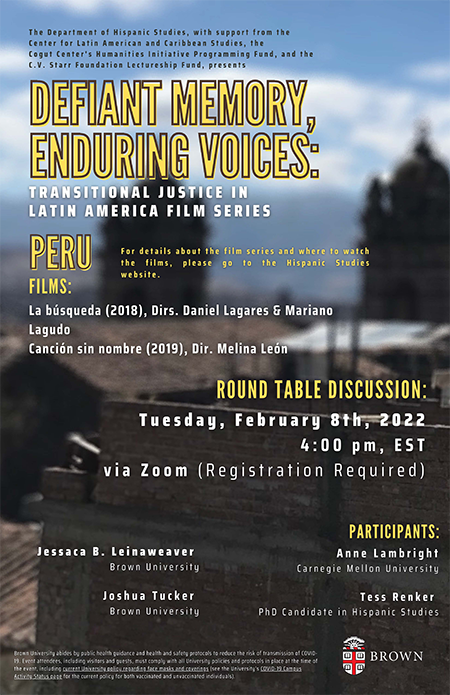 This film series brings together scholars, students and filmmakers in a year-long discussion of transitional justice in order to interrogate how cinema has mobilized calls for truth and reconciliation in Latin America. Many Latin American countries have experienced forms of political turmoil, followed by projects in civil society designed to achieve peace through transitional justice, and Defiant Memory, Enduring Voices offers an interdisciplinary collaboration that examines questions of memory and trauma across these different national frameworks in contemporary Latin America. The series will include three event clusters spotlighting, respectively, Chile, Colombia, and Peru, in order to illuminate commonalities across national and regional contexts, while also theorizing potential divergences. Each sub-series will pair films (to be screened asynchronously online) with scheduled roundtable discussions bringing together activists, filmmakers, and an interdisciplinary range of faculty and graduate students to discuss cinema’s role in advancing transitional justice within and across several national contexts.

The third sub-series event for Defiant Memory, Enduring Voices: Transitional Justice in Latin America Film Series considers Peru’s Internal Armed Conflict (~1980-2000) through Daniel Lagares’ and Mariano Lagudo’s La búsqueda (2018) and Melina León’sCanción sin nombre (2019). La búsqueda, follows the son of extrajudicially executed “terrorists,” a former child soldier from Ayacucho, and the daughter of disappeared Quechua parents as they attempt to find the bodies of missing loved ones. Beyond highlighting the experiences of those whose voices have long been silenced by “official” narratives, the documentary also points to the persistence of Conflict-era stigmas. León’sCanción sin nombre follows Andean peasant Georgina who, heavily pregnant and living in a coastal shanty town, travels to the capital city of Lima in search of medical assistance. After giving birth in an urban clinic, she fights to find her daughter when the baby is taken away by medical staff and never returned. The roundtable brings together author-activists José Carlos Agüero and Lurgio Gavilán, both of whom have written extensively on Peru’s Internal Armed Conflict and are protagonists of La búsqueda. They will be joined by Jessaca B. Leinaweaver, professor of Anthropology at Brown, Joshua Tucker, professor of Music at Brown, Anne Lambright, professor of Hispanic Studies at Carnegie Mellon University, and Tess Renker, PhD candidate in Hispanic Studies. The films will be available for free virtual viewing; details will be provided upon registration.

Professor Jessaca Leinaweaver is the author of The Circulation of Children: Adoption, Kinship, and Morality in Andean Peru (2008) and has conducted extensive field work in the Ayacucho region.

A leader in the field of Andean Studies, Professor Anne Lambright is the author of Andean Truths: Transitional Justice, Ethnicity, and Cultural Production in Post-Shining Path Peru (2015), which considers how literature and the arts challenge dominant representations of post-Conflict Peru.

Tess Renker is a PhD candidate in Hispanic Studies at Brown currently writing a dissertation on literary responses to Peru’s Internal Armed Conflict, with a particular emphasis on the work of former militants, women, and residents of Ayacucho.