Is the Political Scoreboard in South America Changing? Elections in Brazil, Paraguay and Argentina 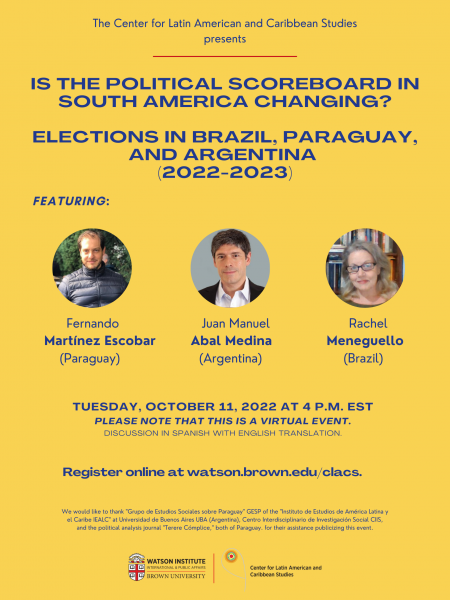 Join us for a panel discussion about the elections taking place in the coming months in Brazil, Argentina, and Paraguay. This virtual event will be held in Spanish with English translation. All are welcome!

Fernando Martínez Escobar Paraguay, Ph.D. (Paraguay)
Ph.D. in Social Sciences from the University of Buenos Aires (UBA); Master in Political Action and Citizen Participation in the Rule of Law from the Rey Juan Carlos University, the Francisco de Vitoria University, and the Illustrious Bar Association of Madrid-Spain; and Lawyer from the National University of Asunción (UNA). Professor of Political Science at the CBC UBA; and Leaders and Leadership of Latin America FSOC UBA. Participates in research groups CLACSO, UBACyT, and GESP, among others. His area of research focuses on the functioning of the Paraguayan party system, Political Parties, and Neo-institutionalism, among others.

Juan Manuel Abal Medina, Ph.D. (Argentina)
Doctor in Political Science FLACSO Mexico in association with Georgetown University. CONICET and UBA Researcher category I. Regular Professor of Comparative Political Systems and Political Science at the UBA. Former National Senator for the Province of Buenos Aires, Chief of the Cabinet of Ministers, Secretary of Public Administration, Secretary of Public Communication, Chief of the Cabinet of Advisors of the General Secretariat of the Union of South American Nations (UNASUR), and Ambassador to MERCOSUR and the ALADI among other institutional positions. He has published dozens of books as an author and co-author, among which the Political Science Manual (EUDEBA, 2010 and 2015), The Death and Resurrection of Political Representation (FCE, 2004 and 2008), The Siege of Politics: Latin American Parties in the neoliberal era, with Marcelo Cavarozzi (Homo Sapienz, 2002) and Argentine electoral federalism, with Ernesto Calvo (EUDEBA, 2001). Likewise, he has published dozens of academic articles in the main scientific journals of his specialty in Europe, the United States, and Latin America, among which "Party Politics", "PROJECTIONS-MIT Journal of Planning", "Electoral Studies", "Revista Iberoamericana” and “Latin American Profiles” among others.