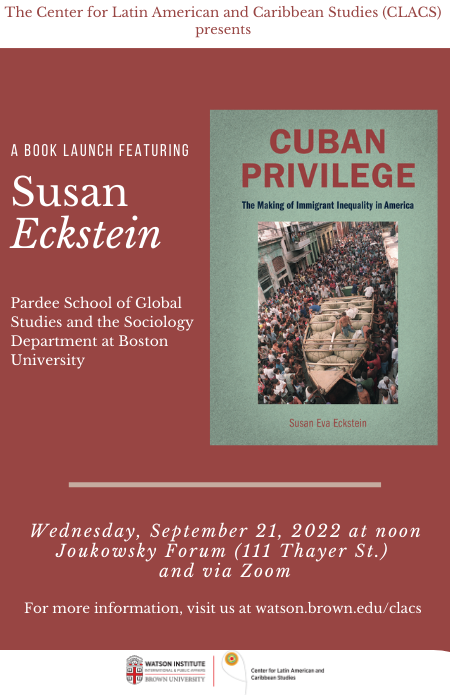 For over half a century the US granted Cubans, one of the largest immigrant groups in the country, unique entitlements. While other unauthorized immigrants faced detention, deportation, and no legal rights, Cuban immigrants were able to enter the country without authorization, and have access to welfare benefits and citizenship status. This book is the first to reveal the full range of entitlements granted to Cubans. Initially privileged to undermine the Castro-led revolution in the throes of the Cold War, one US President after another extended new entitlements, even in the post-Cold War era. Drawing on unseen archives, interviews, and survey data, Cuban Privilege highlights how Washington, in the process of privileging Cubans, transformed them from agents of US Cold War foreign policy into a politically powerful force influencing national policy. Comparing the exclusionary treatment of neighboring Haitians, the book discloses the racial and political biases embedded within US immigration policy.

Copies will be available for purchase courtesy of the Brown bookstore.

Susan Eckstein is a Professor in the Pardee School of Global Studies and in the Sociology Department at Boston University. She has written numerous books and articles on Mexican urban poor, political-economic developments in Cuba, Cuban immigrants, immigration policy, impacts of Latin American revolutions, and edited books on Latin American social movements and social rights, and on immigrant impacts in their homelands. Her books include How Immigrants Impact Their Homelands (co-editor), The Immigrant Divide: How Cuban Americans Changed the U.S. and Their Homeland, What Justice? Whose Justice? Fighting for Fairness in Latin America (co-editor), Struggles for Social Rights in Latin America (co-editor), Back from the Future: Cuba under Castro, Power and Popular Protest: Latin American Social Movements (editor), The Poverty of Revolution: The State and Urban Poor in Mexico, The Impact of Revolution: A Comparative Analysis of Mexico and Bolivia. In January 2022 Cambridge University Press will publish her most recent book, Cuban Privilege: The Making of Immigrant Inequality in America. She is the recipient of fellowships from the John Simon Guggenheim Memorial Foundation, the Radcliffe Institute for Advanced Study, the American Council on Learned Societies, the Ford Foundation, John D. and Catherine MacArthur Foundation, Rockefeller Foundation, Tinker Foundation, and Christopher Reynolds Foundation. She has received a number of awards for her publications.