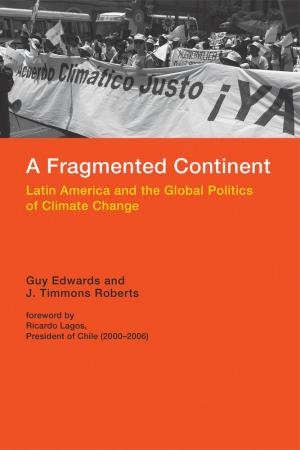 This month, Timmons Roberts and Guy Edwards will release their new book A Fragmented Continent: Latin America and the Global Politics of Climate Change(MIT Press, 2015). The book contains a forward by former President of Chile Ricardo Lagos

Roberts is the Brown University Ittleson Professor of Sociology and Environmental Studies. Edwards works as a Research Fellow at Brown's Institute for the Study of Environment and Society, where he is the Co-Director and Co-Founder of the Climate and Development Lab. Both authors have participated in a range of CLACS events in the past, including the February 2015 panel The Countdown to the 2015 UN Climate Summit in Paris: Assessing Latin America's Importance & Leadership.

Latin American countries have increased their influence at the United Nations climate change negotiations and offered potential solutions on coping with global warming. Yet in the face of competing priorities, sometimes these climate policies are jettisoned, undermined, or simply ignored.

A Fragmented Continent focuses on Latin America’s three major blocs at the UN climate negotiations, and how they attempt to balance climate action with building prosperity. Brazil has reduced its deforestation but continues its drive for economic growth and global recognition. A leftist group led by Venezuela, Bolivia, and Ecuador decries the injustice of climate change but is highly dependent on the export of fossil fuels. A new group including Chile, Costa Rica, and Peru (and supported by Mexico) offers sharp reductions in their carbon emissions in return for greater action by others.

Weaving together issues of political economy, trade, foreign policy, civil society, and environmental protection, A Fragmented Continent offers a long-missing perspective on one of this century’s greatest challenges and neglected regions.

A Fragmented Continent represents the first of its kind intended for a general audience, providing important insights into how the region’s countries are responding to global warming. Its findings are particularly relevant as we approach a new phase of global climate governance. The likely agreements in Paris have important implications for Latin America.