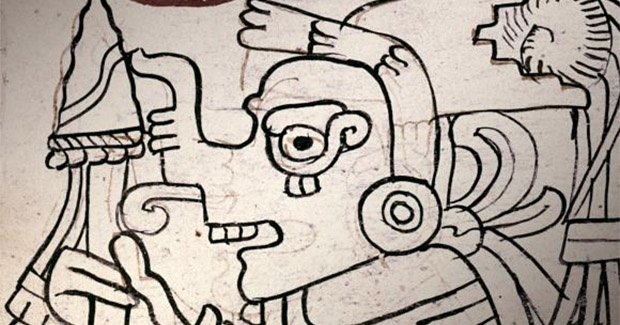 A detail of an image from page 4 of the Grolier Codex with red underpainting visible. Photo: Justin Kerr

The study, Houston said, “is a confirmation that the manuscript, counter to some claims, is quite real. The manuscript was sitting unremarked in a basement of the National Museum in Mexico City, and its history is cloaked in great drama. It was found in a cave in Mexico, and a wealthy Mexican collector, Josué Sáenz, had sent it abroad before its eventual return to the Mexican authorities.”

“It became a kind of dogma that this was a fake,” Houston continued. “We decided to return and look at it very carefully, to check criticisms one at a time. Now we are issuing a definitive facsimile of the book. There can’t be the slightest doubt that the Grolier is genuine.”