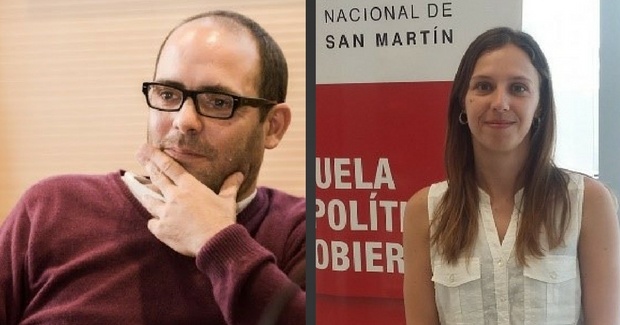 The Center for Latin American and Caribbean Studies and the Graduate Program in Development are proud to announce this year's participants in the second year of our exchange agreement with Universidad Nacional de San Martín (UNSAM) in Buenos Aires, Argentina. We are pleased to announce that Cecilia Rocha and Ramiro Segura have been selected as the UNSAM scholars who will visit Brown during 2017. Their competitive travel scholarships are supported by UNSAM as part of the agreement with Brown.

Cecilia Rocha Carpiuc is a doctoral student in political science and a researcher in the National Research System in Uruguay. She holds an undergraduate degree in political science and a MA in public policy and gender studies. Her dissertation examines the formation of collective action among domestic workers in Latin America. Given their work in the informal economy, their emotional ties with their employers, and their identities as low income ethnic and racial minority women, one would expect many barriers to organization. Rocha’s project investigates the mechanisms that make collective action among domestic workers possible. Rocha holds a 90-day residency and will be at CLACS and GPD in September-November, 2017.

Ramiro Segura is Professor of Urban Anthropology at Universidad Nacional de San Martín and a researcher with the Consejo Nacional de Investigaciones Científicas y Técnicas (CONICET) at the Instituto de Altos Estudios Sociales. He holds the Ph.D. in Social Sciences from the Universidad Nacional de General Sarmiento, and previously held a postdoctoral position at Berlin's Freie Universität. His research analyzes cultural heritage, urban insecurity, socio-spatial segregation, daily mobility and social inequalities in urban spaces. He is the author of Vivir afuera: Antropología de la experiencia urbana (San Martín: UNSAM 2015), and has co-edited three books on urban studies in Latin America. Segura holds a 30-day residency and will be at CLACS and GPD in November 2017.

As part of this exchange, UNSAM has agreed to host Brown faculty and graduate students interested in conducting research in Argentina. Brown scholars and students will finance their own travel and stay in Argentina, but UNSAM will provide Brown visiting scholars with access to office space, staff support, computers, and libraries. Brown faculty and graduate students interested in participating in this exchange should contact Prof. José Itzigsohn (Sociology, UNSAM Coordinator), Prof. Jessaca Leinaweaver (Anthropology, Director of CLACS), or Prof. Nitsan Chorev (Sociology, GPD co-Director) for more information. The deadline is rolling, and expressions of interest are welcomed at any time.