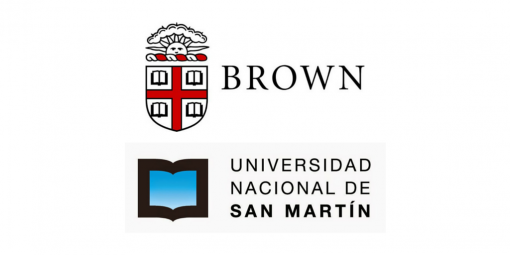 Brown University and the Universidad Nacional de General San Martín (UNSAM) in Buenos Aires, Argentina have launched a program of faculty and graduate student exchange. Each institution has pledged to establish up to two competitive scholarships per academic year for social scientists to make research visits to the other. Grants are open to faculty, post-docs, and graduate students.

The universities plan to collaborate on research, academic seminars, and short-term projects. Professor of Sociology and CLACS Faculty Affiliate José Itzigsohn will serve as the Brown Coordinator of the program. Professor of Political Science Lucas Gonzalez, who has visited Brown previously through the Brown International Advanced Research Institutes (BIARI), CLACS, and the Graduate Program in Development (GPD), will serve as the UNSAM Coordinator.

UNSAM Professor of Political Science Jacqueline Behrend is the first participating visitor to Brown. She will be at the Watson Institute for International and Public Affairs until mid-February. Professor Behrend specializes in comparative Latin American politics. Her current work examines relationships between economic structures, political institutions, and the resilience of illiberal practices at the subnational level.

CLACS’ Emma Strother interviewed Professor Jacqueline Behrend on her current research and her interest in the Brown-UNSAM collaboration.

Strother: Thank you for taking the time to meet with me. I’m wondering if you could tell me a little about your research, and especially what you will be presenting in your lecture at the Watson Institute this Monday.

Behrend: I’ve been working on subnational politics for quite a long time now, focusing especially on Argentina but also comparatively within Latin America and with other regions of the world. I’ve just finished an edited volume that is coming out at the end of April or early May with Johns Hopkins University Press. It’s a volume that Laurence Whitehead from Oxford University and I edited together, and it’s called Illiberal Practices: Territorial Variance within Large Federal Democracies. What we did was compare variation within subnational democracy in three Latin American countries: Argentina, Brazil, and Mexico, but also in the United States from a long-term historical perspective, India, and Russia.

When we finished this project, one of the issues that remained for me was the fact that you can have institutional change, you can have alternation in office, but sometimes things still don’t change. You see a lot of resilience of illiberal practices at the subnational level. So the purpose of this new research project that I am starting here at Brown—and which I’m working on with a co-author, Matías Bianchi, who is at the University of Arizona—is to understand what explains the resilience of liberal practices at the subnational level. We started to focus on the subnational state, and on the relationship between the economic structure and the political structure. And this is what we’re talking about when we say State-Society relations.

The title of my presentation is “The Political Economy of Subnational State-Society Relations in Argentina,” and when I talk about State-Society relations, I’m thinking about how political elites and political interests relate to the subnational state and shape political practices. So this is what I’ll be discussing on Monday. It’s a very new project, and I’ll be discussing mostly the conceptual ideas, the research questions I have. I think I will have at this stage more questions for the audience than results to show, but I think it’s a very interesting project. I'm very excited about it.

Behrend: Yes, well this is what I’m trying to do, I think if we look at it from a narrow, institutionalist and political science perspective we’re missing out on a lot. By looking at what economic groups you have and what kinds of economic interests dominate subnational polities, you can understand a lot more about why certain political practices are resilient.

Strother: We’re looking forward to it! Could you talk briefly about what attracted you to the Brown-UNSAM collaboration?

Behrend: Brown is very well-known as a center for political studies, for interdisciplinary area studies, and also for subnational politics. I had heard a lot about Brown. I knew a lot of the scholars who work here. I knew Richard Snyder [Director of CLACS] personally because we had met at different conferences, but I’ve also read a lot of the scholars who work at Brown and at the Watson Institute in particular.

When Richard told me that this initiative was being developed between Brown and UNSAM I thought it was very exciting, and as soon as it came out I applied for it. So I’m the first one to come! I think it’s a very exciting initiative and it’s going to allow for a very interesting exchange between scholars in Argentina and the US. 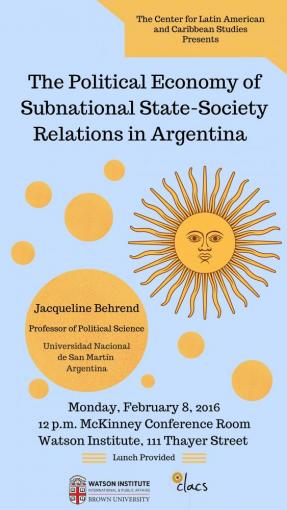