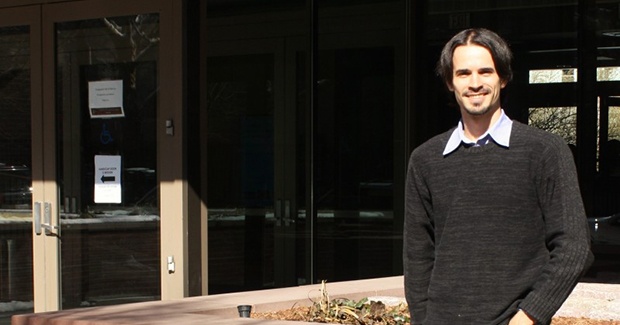 Brown University and the Universidad Nacional de General San Martín (UNSAM) in Buenos Aires, Argentina launched a program of faculty and graduate student exchange in February. Each institution has pledged to establish up to two competitive scholarships per academic year for social scientists to make research visits to the other. Grants are open to faculty, post-docs, and graduate students.

UNSAM doctoral student of political science Lucas Christel is visiting the Watson Institute for Internationl and Public Affairs until the beginning of June.

Van Praag: Would you please tell me about your current research?

Christel: About a month ago I finished my dissertation, which deals with the legislative impact of social resistance to mining in Argentina. I developed a comparative analysis of four Argentine provinces. The question that guided my investigation was: Why do social resistances influence mining legislation in some Argentine provinces and not in others?

I worked with two provinces, Mendoza and Córdoba, that have had laws prohibiting surface mining since 2007 and 2008 respectively, and two provinces, Catamarca and San Juan, where mining has existed since 1997 and 2005 respectively. In these four provinces social resistances have attempted to limit or prohibit surface mining. Bearing this in mind, I argue that structures of political opportunity in Argentine provinces are defined by characteristics of the political and economic systems of each province.Subnational structures of political opportunity either favor or hinder legislative impact.

Now, I am primarily considering two lines along which to deepen my work. The first would be to examine the case of the Argentine province Rioja, where large-scale social resistance to mining has not been able to effect laws that limit the access of mining companies, but such companies have nevertheless been unable to gain a foothold. This is a case that conflicts with my previous findngs. The second line of investigation would be to develop a model of mining resource governance at the subnational level in Argentina. This model would add actions from the corporate sector to my previous work on relationships between the state and civil society.

Van Praag: Could you tell me more about your talk on May 2nd?

Christel: The talk we are organizing for May 2nd wil be a presentation of the major findings of my dissertation. The talk will focus on three main challenges I came across while researching: 1) conceptualizing social resistances as an intermediate space between contentiousness and direct action, 2) demonstrating that social resistances in Argentine provinces are different from one another, and 3) relating these differences to characteristics of larger political and economic structures. 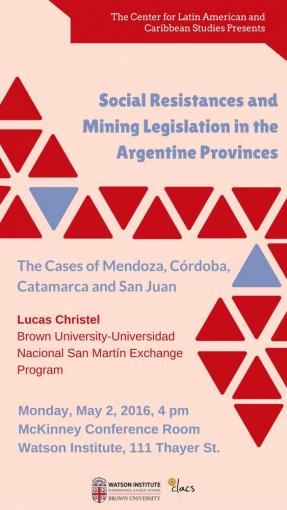