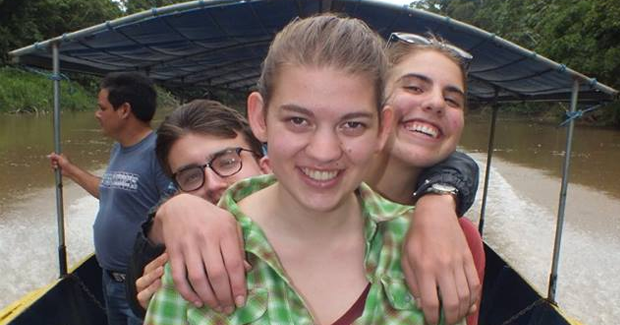 What have you done since graduation?

I graduated in May and I spent the summer working on a project that I started at school. It is called CS+Social Good and we’re working to build a national alliance of students and young people interested in working at the intersection of tech and social impact. We do work with student groups at universities to create a broader alliance in order to bring them all together and develop some kind of weight to leverage their collective interest with the goal of influencing policy and industry. After that, I started working in political/advocacy work. I work in a team that has to make a lot of big decisions in state-wide and national political issues. My background and perspective in national and international politics, which partly came through CLACS, is very helpful. Additionally, in California (where I live) everyone speaks Spanish, so that’s a skill I’m very glad to have.

Where do you see yourself in the future? What do you want to do with your Computer Science and Latin American Studies background?

A while ago, I made the decision that I didn’t want to be a software engineer, which is what people usually do with a CS degree. At the moment, I probably think I’m going to stick with that decision. I do think that problem-solving skills and the ability to understand technical stuff are really important. In general, technology is infiltrating every corner of the Earth and it is good to understand it and know how to talk about it. In terms of my Latin American Studies background, maybe I’ll end up back in Latin America. Speaking Spanish is useful everywhere I go and being able to interface different types of people from lots of different places is important. Additionally, the ability to adapt the way that I communicate and present myself to fit in different environments is very useful – whether I’m at a community event, another country or in my office. Both of these skill sets are broadly transferrable to a lot of different places.

Why did you decide to become a CLACS fellow during your senior year at Brown and how did it contribute to your education?

I became a CLACS fellow because I joined Latin American Studies really late (November of my junior year) and then I studied abroad. When I got back, I didn’t really know anyone in the concentration and I thought the CLACS fellowship would be a good way for me to solidify my engagement in the community. As for my education, there were very engaging conversations during the speaker series and it was interesting to see the different types of questions that people were asking speakers and the different backgrounds that they had.

Who was your favorite speaker during the CLACS speaker series and why?

I really liked the talk with Professor Wendy Schiller (Chair of Political Science at Brown University) – she talked about the process of hiring professors for diversity and that was really interesting.

What were some of your favorite classes in LACA?

I took a lot of classes during my senior Spring that I really liked. One was with Professor Iris Montero – she’s amazing and incredibly smart. Her class was on the history of science in the Americas. It was hard, as we were reading a lot of Spanish texts from the 1500s and 1600s and dense academic papers, but it was super interesting and a lot of fun. I also took a class with Professor Felipe Martínez Pinzón. It was called Latin American Diaspora in the U.S. One of my friends and I worked at a bilingual school downtown. It was really fun because we got to engage with people and speak Spanish. We had a great group of people in the class.

If you could do anything differently about your time at Brown, what would it be?

In terms of my time at Brown, there wasn’t really a good way to do it differently because I don’t think I would’ve known that I wanted to do LACA earlier. Yet, it would’ve been nice if I started a little bit earlier and gotten to know the community a little bit better.

What would you recommend to LACA concentrators?

Take a class with Professor Iris Montero! And go to events. I’ve done a lot of cold calling and emailing people that I find interesting. If you spend 30-45 minutes doing some research about them, you can have a better conversation with these people. If there’s a person that comes over the course of the semester, spend some time doing your research beforehand and know what you’re talking about. Take advantage of the fact that really interesting people come to campus and you have access to them.