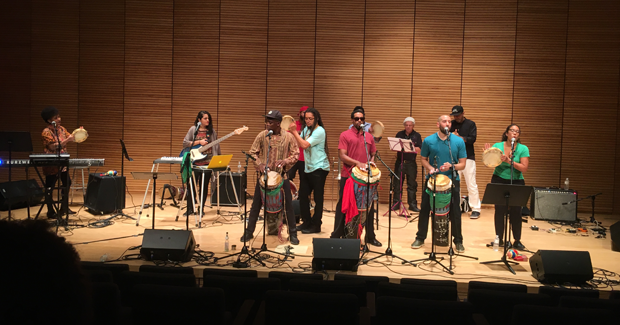 "We are a group of resistance. We identify as African & Indigenous and Dominican-Haitian. We are Taíno and African. We want this to be our legacy."

An urban roots music group named Pa’lo Monte, based in New York City, is rejecting the state-sponsored narrative of Dominicanidad through their resistance music that fuses African rhythms from the Dominican Republic and Haiti with contemporary music styles. Pa’lo Monte’s performance at Brown University showcased the African rhythms and musical traditions, such as call and response that directly linked Africa to the Dominican Republic. They sang in Spanish, Haitian Kreyol, and Spanish and played with Dominican musical instruments, such as the tambora, güira, clave and palos drums (also called atabales). They played Afro-Dominican music, such as “palos.” This Dominican folk music was played in maroon communities during colonial times and throughout rural communities before the music was suppressed during the Trujillo regime. By affirming, celebrating and creating Afro-Dominican music, Pa’lo Monte is defying this historical suppression of blackness by the Dominican state.

In an interview with Osvaldo Sánchez, the founder and director of the group, he states that he founded the music group in order to educate the Dominican community at large “que somos descendientes de Africanos y Taínos” (that we are descendants of Africans and Taínos). He wants Dominicans to be proud of their rich African and Indigenous ancestry. Most of the members of the group are either from the Dominican Republic or Haiti who have immigrated to the United States. When I asked Osvaldo how the members of the group identify he replied, “We consider ourselves Dominican-Haitian in terms of identity and solidarity. We are brothers and sisters. Nosotros también somos negros. Somos de la isla entera Quisqueya. Ayiti quiere decir ‘tierra alta’ y Quisqueya ‘ma de tierra’” (We are also Black. We are of the island Quisqueya. Ayiti meaning “land of high mountains” and Quisqueya meaning “mother of the earth”). Osvaldo invokes the Taíno names of the island of Hispaniola, Quisqueya and Ayiti, to remind Dominicans of their Taíno roots and that the names Hispaniola, Saint Domingue, Santo Domingo, and Dominican Republic were branded to the island by the French and Spanish colonizers. Osvaldo also uses the identifier “Dominican-Haitian” to establish a new Dominican national imaginary that acknowledges that Dominicans and Haitians were once one on the island, prior to colonization and during the Haitian reunification of the island.

Pa’lo Monte is an additional example of the ways Dominicans in the diaspora along with Dominicans in the island have destabilized the state’s notions of Dominican identity. Pa’lo Monte seeks to decenter whiteness in the racial imaginary of the Dominican Republic and promote the African and Indigenous heritage and ancestry that has been expunged from the “official” Dominican narrative. Emerging scholarship, such as the work of scholars Milagros Ricourt (2016) and Lorgia García-Peña (2016) complicates the narrative of the “self-hating Dominican” by tracing the complexities and contradictions that exist within dominicanidad. The case of Dominican national identity cannot be generalized or simplified because as their research indicates, dominicanidad is rich with intertwined histories, complexities, and nuance that continues to be unearthed.

To learn more about the interview (conducted in Spanglish but translated in mostly English), please read the transcript below.

Nikkie: Can you tell me a little bit about yourself and about how Pa’lo Monte got started?

Osvaldo: I began at 7 years old learning about Dominican folklore. My brothers were percussionists and folkloric dancers. I came from a family that played folkloric music and instruments. I wanted to learn about my roots. In school, they teach kids that they are descendants of Europeans but I knew I had African and Indigenous roots, so I went to the rural communities of the Dominican Republic to learn about those roots. In 1993, I went to New York and played with Asa Dife (dife means fire in Haitian Kreyol), a New York Dominican folk-fusion group then I founded my own project, Pa’lo Monte which is now going on 20 years. My mission is to let my community know where we are really from. We are not only a country that dances bachata and merengue. We are descendants of Africans and Taínos. This has been ignored. When you know where you are from, you are a strong person. You’re not searching for a culture because you have your own. You understand that you are negro/a or Afro-Dominican. Tu te identifica con tu cultura y tienes tu propia identidad (You identify with your culture then you have your own identity). I want to show my community to be proud of our blackness. We have a rich culture of African and Indigenous descent.

Nikkie: Since the band members are from New York, California, and the Dominican Republic how do you organize yourselves to rehearse?

Osvaldo: The group is based in NY but there are musicians from a lot of places. It’s hard but we do it. We have the courage to do it.

Nikkie: What languages do you sing in?

Osvaldo: Spanish, Haitian Kreyol, and English. Some of the songs we sing are traditional, but we also sing original songs that I write.

Nikkie: How would you describe the genre of music that you all play and what instruments does the band use?

Osvaldo: The basis of the music is folkloric. We are the new Dominican beat. A fusion of African rhythms and beats. The instruments are all derived from the Dominican Republic. Primeramente somos un grupo Afro-Dominicano de origen Dominicano y Haitiano de descendencia Africana (We are firstly an Afro-Dominican group of Dominican and Haitian origin and African descent). And my new project is to recruit some students to come to the Dominican Republic in the future to learn about their roots.

Nikkie: What links do you see between the music you all play and social justice?

Nikkie: One of the song lyrics is “tenemos que ser libres para progresar” (we have to be free to progress). Can you speak a little bit more about these lyrics and their significance?

Osvlado: We want freedom to study, to be religious. We want the liberation of all Black people. Que tan lejos que el universo puede seguir maltratando a la humanidad y cuales son las consecuencias (How far can the universe go mistreating humanity and what are the consequences for that).

Nikkie: How do members of your group identify?

Osvlado: We consider ourselves Dominican-Haitian in terms of identity and solidarity. We are brothers and sisters. Nosotros también somos negros. Somos de la isla entera Quisqueya. Ayiti quiere decir “tierra alta” y Quisqueya “ma de tierra” (We too are Black. We are of the entire island of Quisqueya. Ayiti/Haiti means “land of high mountains” and Quisqueya means “mother of the earth”). Those are the original names the Taínos gave the island. We must honor and remember that.

Nikkie: What will be the legacy of Pa’lo Monte?

Osvaldo: We are a group of resistance. We identify as African & Indigenous and Dominican-Haitian. We are Taíno and African. We want this to be our legacy.