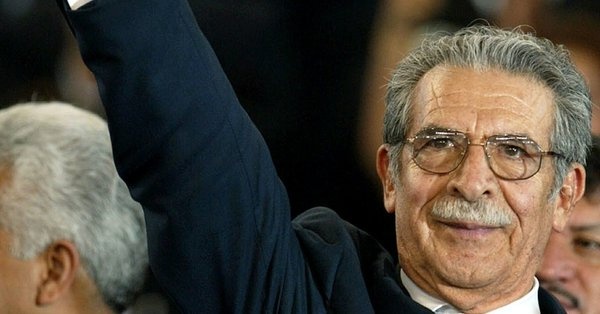 Gen. Efraín Ríos Montt, who as dictator of Guatemala in the 1980s ordered fierce tactics to suppress a guerrilla insurgency and was later convicted of genocide and crimes against humanity, died on Sunday in Guatemala City. He was 91.

The cause was a heart attack, according to his lawyers, Jaime Hernández and Luis Rosales. The general had dementia and had suffered lung and heart problems in recent years.

In the panoply of commanders who turned much of Central America into a killing field in the 1980s, General Ríos Montt was one of the most murderous. He was convicted in 2013 of trying to exterminate the Ixil ethnic group, a Mayan Indian community whose villages were wiped out by his forces.

A Guatemalan judge found that the general had known about the systematic massacres, in the hillside hamlets of the El Quiché department, and had done nothing to stop them or the aerial bombardment of refugees who had fled to the mountains.

The conviction, seen as a landmark in human rights law, was overturned shortly afterward. At his death he was being retried in absentia.

But the general was also a paradox. He began his political career as a reformer and became an evangelical preacher and teetotaler. Though reviled by many, he was a hero to others who believed his “beans and bullets” policy had helped keep Guatemala from falling under the power of Marxist-led guerrillas.

President Ronald Reagan was General Ríos Montt’s most prominent admirer. After meeting him in 1982, Mr. Reagan said the general was “getting a bum rap on human rights.”

“I know that President Ríos Montt is a man of great personal integrity and commitment,” he said. “I know he wants to improve the quality of life for all Guatemalans and to promote social justice. My administration will do all it can to support his progressive efforts.”

José Efraín Ríos Montt was born on June 16, 1926, in the highland town of Huehuetenango. He joined the army as a young man and was trained at the United States Army School of the Americas in the Panama Canal Zone.

Guatemala has long been under the shadow of American influence. The leftist president Jacobo Arbenz was overthrown in a C.I.A.-backed coup in 1954, an event in which General Ríos Montt, then a young junior military officer, played a minor role.

In 1970, he became army chief of staff, but lost his post as a result of political rivalries and was sent to Washington to join the faculty of the Inter-American Defense College.

General Ríos Montt returned to Guatemala in 1973. The next year he ran for president as the candidate of a coalition supported by the center-left Christian Democrats. He lost after what was widely seen as fraud directed by military commanders. He was then sent out of the country as military attaché in Spain.

In the late 1970s, after returning to Guatemala, General Ríos Montt reinvented himself. He took a Dale Carnegie course in human relations, abandoned Roman Catholicism, became a preacher in the California-based Church of the Word, and struck up friendships with American evangelists, including Jerry Falwell and Pat Robertson.

With his slicked-back hair, bushy mustache, charismatic speaking style and reputation for personal rectitude, General Ríos Montt built an enthusiastic following. On March 23, 1982, he and a handful of other officers staged a successful coup. He became head of a three-man junta.

By that time, leftist guerrillas had seized power in Nicaragua and were mounting strong campaigns in El Salvador and Guatemala. Determined to crush the Guatemalan insurgency, General Ríos Montt intensified the scorched-earth campaign that had been waged by his predecessor, Gen. Romeo Lucas García. In his first five months in power, according to Amnesty International, soldiers killed more than 10,000 peasants.

Thousands more disappeared. Hundreds of thousands fled their homes, many seeking refuge across the border in Mexico. Nearly all victims were indigenous people of Mayan extraction.

General Ríos Montt liked to say that a true Christian carried the Bible in one hand and a rifle in the other.

“If you are with us, we will feed you,” he told Guatemalan peasants. “If not, we will kill you.”

Rival officers deposed General Ríos Montt in a coup on Aug. 8, 1983, after he had effectively ruled as dictator for 17 months. He remained a public figure, however, running for president in 1990 and 2003. Supporters portrayed him as incorruptible, and said he had brought a measure of peace to a country that was careening toward anarchy.

General Ríos Montt served several terms in Congress, which gave him immunity from prosecution. When his last term expired in 2012, he lost that immunity.

By then, advances toward civilian democracy in Guatemala had made it feasible to indict him. An exhaustive “truth commission” investigation provided much evidence. More came from the excavation of mass graves.

General Ríos Montt’s trial opened in January 2013. He and his former chief of intelligence were charged with responsibility for massacres in 15 Ixil Maya villages in which 1,771 unarmed men, women, and children were killed.

The general, who was then 86, adamantly protested his innocence.

“I never did it,” he testified at his trial. “Of everything that has been said here, there has never been any evidence of my participation.”

In pronouncing her verdict after a five-month trial, Judge Yasmín Barrios said she was “completely convinced” of General Ríos Montt’s guilt. She sentenced him to 80 years in prison.

Relatives of victims who packed the courtroom, many wearing colorful Maya clothing, erupted in cheers of “Justice!” and “Yes, it was genocide!” The general’s co-defendant was acquitted.

General Ríos Montt is survived by his wife, María Teresa; a son, Enrique, who served as army chief of staff but resigned after being charged with embezzlement; and a daughter, Zury, a former member of Congress who is married to a Republican former member of the United States Congress, Gerald C. Weller. Another son, Homero, a military doctor, was killed in 1982 when guerrillas shot down a helicopter in which he was traveling.

“Consider the thousands of unarmed men, women and children killed by the army while he sermonized about morality, and he is a monster,” wrote David Stoll, a professor of anthropology at Middlebury College in Vermont. “Consider the hopes invested in him by many Guatemalans, including poverty-stricken Catholic peasants, and he becomes a hero of mythic proportions."