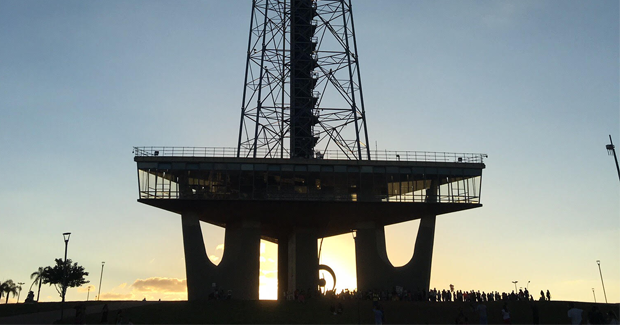 Thamyris Almeida is a third year PhD candidate in the History Department. Almeida has an undergraduate degree in History and a certificate in International Relations from the University of Massachusetts at Amherst. She also completed her master’s degree in Latin American History, focusing on Brazil. Her thesis focused on a Maoist-Communist uprising in the Amazon during Brazil’s military dictatorship, a topic on which little had been written, especially in English.

At Brown, Almeida’s research focuses on the history of television in Brazil from the 1950s into the military dictatorship. She shared, “my dissertation looks at how the industry was formed and then, also, the impact of censorship of the state on the formation of the TV industry.” Though some research has been done on TV in Brazil, most focuses on Globo, the major TV station most people are familiar with. Almeida decided to take a different perspective than past scholars by offering a fresh point of view that instead looks at how pre-Globo TV stations went bankrupt, and the Brazilian state’s role in that. Her enthusiasm about her research shone through, as she stated “I think 1950s TV is just fascinating. The Cold War is happening, Mexico and Cuba also established their first stations then.” Almeida also discussed her interest in studying popular culture and her belief that it is a crucial area scholars should explore, stating “I think you can learn a lot about national identity and how people within a country think of themselves based on the popular culture they’re exposed to.”

A Brazilian herself, Almeida grew up in Belo Horizonte, Minas Gerais and immigrated to Massachusetts with her family when she was seven years old. Growing up undocumented in a working-class family, she was unable to return to Brazil as she was growing up. Her exposure to the country’s culture was limited to what she saw on Brazilian TV stations and tapes of telenovelas acquired at neighborhood Brazilian stores. Watching the telenovelas and discussing them with family members in Brazil on the phone was her main connection to the country. This experience allowed her to comprehend the importance of telenovelas in Brazil and fueled her interest in studying it, knowing it was a central part of the country’s culture. After Brown, she hopes to complete a post-doc or perhaps work as an editor for a Latin American press. Almeida’s passion for Brazilian television is evident and her work will undoubtedly shine a light in academia on one of the things Brazilians love the most: their telenovelas.