Michael Cepek Talk on Whiteness, Indigeneity, and Power in Amazonia 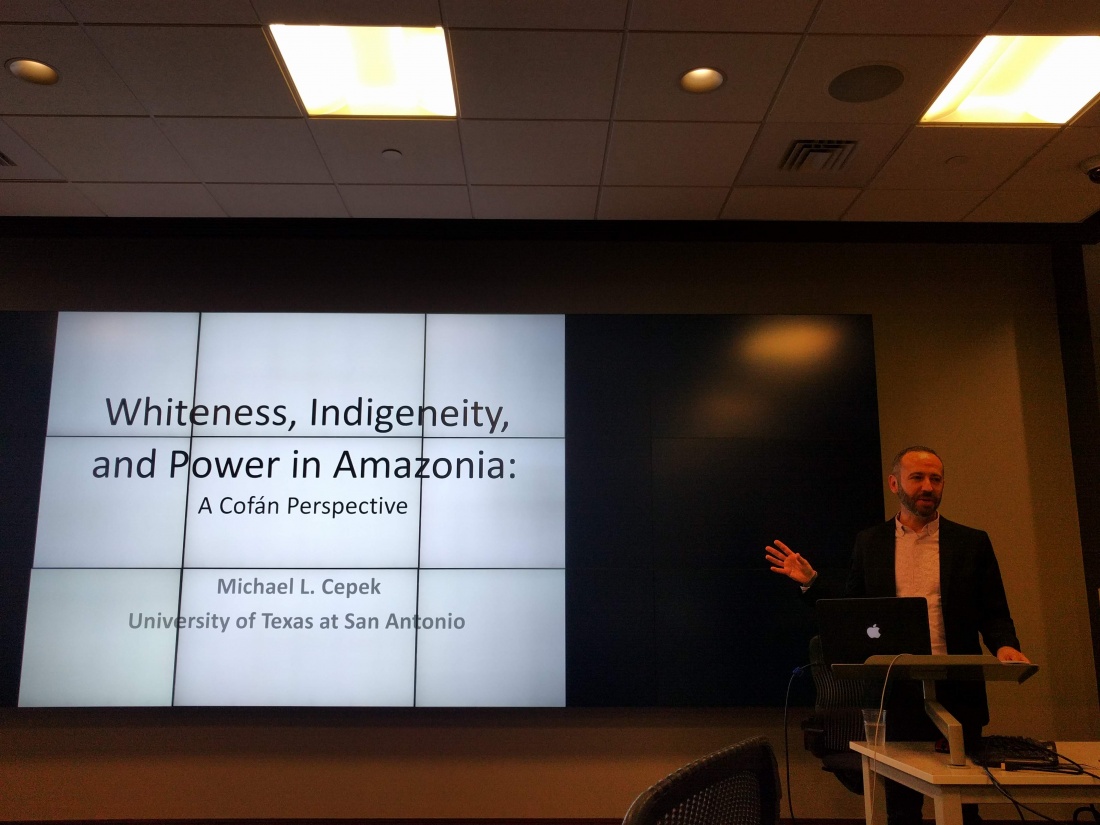 In partnership with Patricia Figueroa, Curator of the Iberian and Latin American Collections at the Brown University Library, the Center for Latin American and Caribbean Studies hosted Professor Michael Cepek (UT San Antonio) for the inaugural lecture of the Sawyer Seminar series on race and indigeneity in the Americas. Cepek’s talk, “Whiteness, Indigeneity, and Power in Amazonia: A Cofán Perspective” drew on research from his first book, A Future of Amazonia: Randy Borman and Cofán Environmental Politics, which focused on the organizing efforts of Borman and the Cofán community against land dispossession and the destruction of the rainforest at the hands of petroleum and mining industries.

In this lecture, Cepek focused on Randy Borman, a man of Euro-American heritage who was born and raised in the Cofán community. Through Borman’s story, Cepek interrogates notions of indigeneity and whiteness. In doing so, he asks what kinds of individuals can claim to be indigenous and who gets to decide on the validity of their claims. Cepek also delves into the social construction of whiteness, that is, how whiteness functions and the powers and privileges whiteness carries.

Ultimately, the community’s acceptance of Randy Borman as Cofán, Cepek argues, demonstrates that in the Cofán community, indigeneity is contextually defined. Thus, no one is born into Cofán-ness, but must work toward this identity through active participation in community life. While Borman’s whiteness may seemingly compromise his status as a “gringo chief” to outsiders, it also gives him access to NGO officials for whom Borman’s whiteness is familiar. In this way, Cepek asserts, Randy Borman is a weapon, a special kind of Cofán person, whose whiteness allows him to do what they can do but who can also do more. Through Borman, the Cofán have learned that whiteness and Cofán-ness are not mutually exclusive, but with sufficient time and energy, they too can transform into ethnoracial others as long as they have access to resources and are willing to do the work. Thus, they educate their children to become Bormanesque in order to become effective advocates for their community.

Hugo Lucitante '19, an undergraduate student at Brown, a member of the Cofán community, and co-founder of the Cofán Heritage Project along with Dr. James Green, Professor of Modern Latin American History and Portuguese and Brazilian Studies, offered comments following Dr. Cepek’s talk.

If you were unable to attend the lecture, you can find a pre-recorded version here.