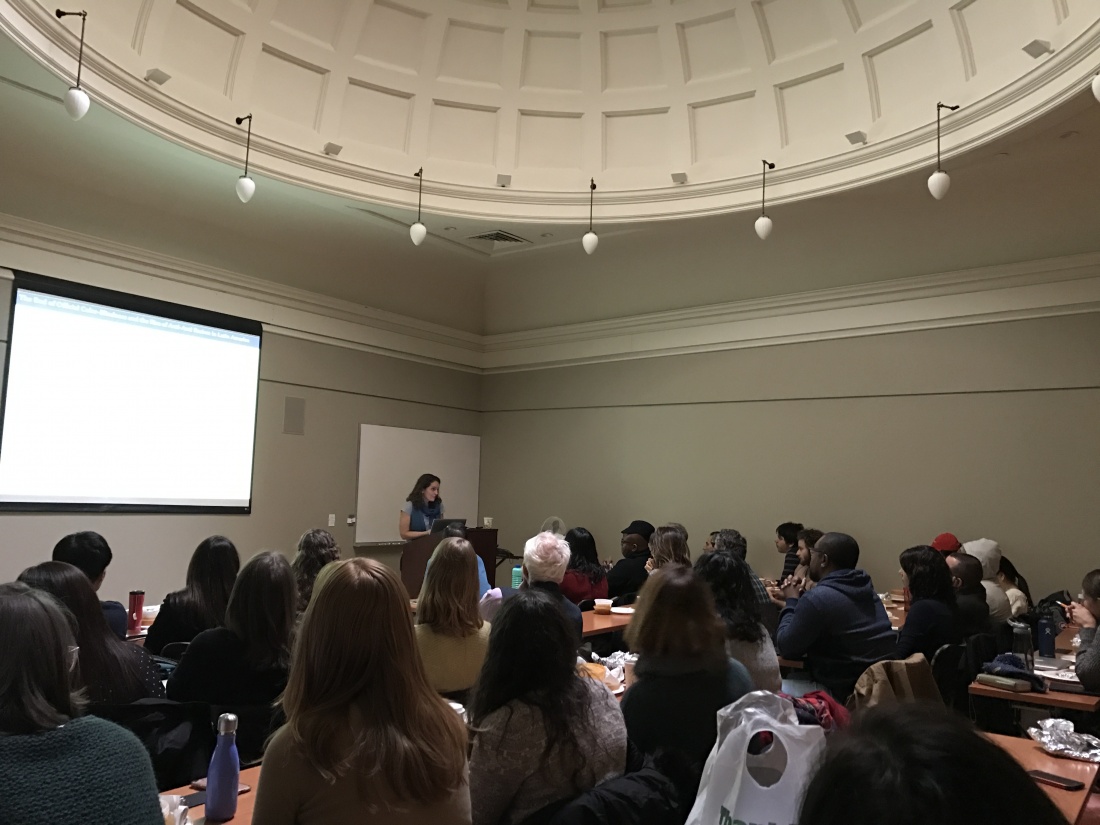 In collaboration with Brown’s Population Studies and Training Center, the Center for Latin American and Caribbean Studies hosted Mara Loveman (UC Berkeley) as part of the Sawyer Seminar series on race and indigeneity in the Americas. Loveman’s lecture, “The End of Official Color-blindness and the Rise of Anti-anti-racism in Contemporary Latin America,” focused on the demise of colorblindness in national censuses across Latin America. Over the last twenty years, Latin American countries have come to recognize the racial and ethnic diversity of their populace, particularly their indigenous and Afro-descendent populations. While the recognition of these populations has been critical in exposing and addressing racial inequalities in Latin America, Loveman argues that official ethnoracial classification is also productive, that is, statistics do not simply describe the world as it is but play a role in constituting the world.

To demonstrate how census data is productive of new data, new subjectivities, and new politics, Loveman centered her analysis on the effects of ethnoracial classification in Brazil. Brazil’s national social policy, which has sought to address racial inequality, has served as a model for many Latin American countries. With the support of census data and sustained political mobilization, the Brazilian government instituted affirmative action programs that helped usher in an era of race-targeted policies beginning in the 1980s. The potential benefits of these policies, Loveman argues, made individuals’ self-identification more consequential than before. Loveman presented data that reflected a shift from most Brazilians self-identifying as pardo, or mixed race, to identifying with categories imposed by the Brazilian government. Thus, state-imposed ethnoracial categories became productive of Brazilian subjectivities.

The adoption of new ethnoracial subjectivities can also have political consequences, Loveman found. In attempting to remedy social inequality in Brazil, affirmative action programs provide resources for black Brazilians. As a result, the boundaries of blackness are now policed, with accusations being levelled at pardos who are not seen as “black enough” to access scarce resources intended to benefit black Brazilians. Loveman notes that such sentiment extended to the media produced as part of Brazil’s 2018 general election, in which far-right candidate Jair Bolsonaro was elected as president. Bolsonaro ran using an anti-anti-racist platform, which included opposing affirmative action programs in Brazilian universities and declaring that identifying by color or race was unpatriotic. Loveman contends that scholars need to adopt an analytic lens that guides them to focus on the productive facets of data and attend to the unanticipated effects of institutionalization of identities. She concludes that analyzing the politics of recognition as productive is essential to better understand the new forms of reactionary coalitions forming in Brazil and other parts of Latin America.