Sawyer Seminar on “Slavery, Capitalism, and the Making of the Modern World” 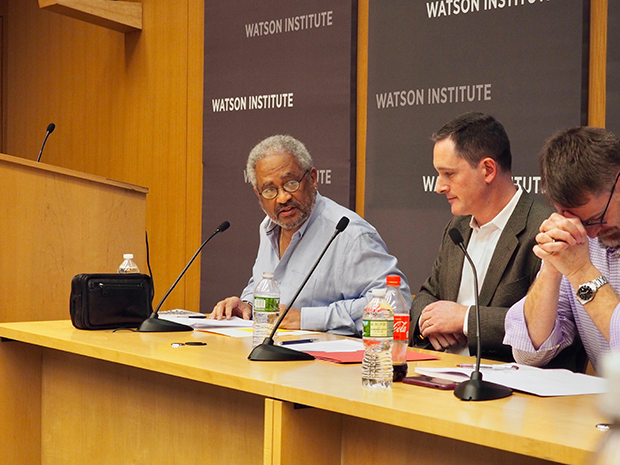 by Lauren Deal, Sawyer Seminar Graduate Proctor and Student in the Department of Anthropology.

In December 2018, the Sawyer Seminar on Race and Indigeneity in the Americas hosted Brown’s Center for the Study of Slavery and Justice for a thought-provoking seminar entitled “Slavery, Capitalism, and the Making of the Modern World”. The evening brought together leading scholars of race, slavery, and labor to discuss the role of slavery in the development of capitalism.  Participants in the seminar included moderator Zach Sell (Visiting Faculty Fellow at the Center for the Study of Race and Ethnicity in America at Brown University), Jennifer L. Morgan (Professor of Social and Cultural Analysis and History at NYU), Seth Rockman (Associate Professor of History at Brown University), Walter Johnson (Winthrop Professor of History at Harvard University), and Anthony Bogues (Director of CSSJ and Professor of African Studies at Brown).

The panel began with presentations from each of the invited participants and spanned from micro to macro level examinations of the relationships between slavery and capitalism. The first presenter, Jennifer Morgan, opened her talk by warning against the potential for race and racism to make us “lazy thinkers” when we allow them to unreflexively stand in for complex social and historical processes. It is neither appropriate nor accurate, she noted, to consider the early development of slavery via the lens of 18th century abolitionist narratives. These narratives obscure the role of slavery as a type of economic trade, and as such renders part of the system of trade invisible. More specifically, it renders certain historical subjects within the system invisible – especially women, whose bodies were treated as sites where the law is enacted and hereditary racial slavery reproduced.  Morgan instead advances process-oriented approaches such as her recent work on colonial numeracy – or the uses and logics of mathematical concepts – in and in relation to the tran-Atlantic slave trade. By tracing how ideas about countability – of currency, populations, the commodification of people - are co-developed in 17th century European markets at the start of the slave trade, she seeks to provide new insights into the early logics of hereditary racial slavery and its effects.

The second presenter, Seth Rockman, gave a more micro account of the extensive reach of slavery as an economic system by detailing the interconnections between laborers in industrializing New England and the Southern plantations. He opened with a narrative of a 13-year-old Rhode Island seamstress who sewed clothing for enslaved women on a Mississippi plantation. Pondering whether that young seamstress ever considered the experiences of the women who would wear her clothes, he raised questions about the entanglements of remote lives in the production and circulation of goods within slave economies. His approach to slave economies as situated within large commodity chains brought to mind parallels between these economies and the global commodity chains of “late capitalism”. By following these chains, he argued that we can see how the spectacular opportunity that is enabled by capitalism is simultaneously linked to oppression throughout American history.

Anthony Bogues approached the question of slavery and capitalism via the history of capitalism writ-large. He began his examination with DuBois’s 1935 Black Reconstruction and the relationship between the categories of the worker and the enslaved. Capitalism, DuBois argued, as a mode of production is inseparable from slavery. Drawing on World Systems Theory and Latin American theories of colonial modes of production, Dr. Bogues troubled the periodization of capitalism, as marked by prefixes such as “merchant”, “financial”, “late”. These prefixes, he argued, presume certain conceptions of commodification, accumulation, circulation, exploitation, and the operations of economic institutions that need to be rethought. Instead of these periodized understandings of capitalism, he prefers the use of “Slave Capitalism”, which better accounts for labor, racialization, double commodification, alienation, exploitation, and domination. Dr. Bogues offered examples of how 17th century trading companies like the West India Trading Company had diverse portfolios that showed characteristics of both trading and finance companies. He explained how these companies invested in a slavery-based economy by investing in the development of plantations in the Caribbean in order to establish plantations. These plantations later became sources of trade goods as well as customers for the slave trade. In this way, the system was one of investment that troubles the idea that merchant capitalism is somehow separate from financial capitalism.

Finally, Walter Johnson explored the ways in which slavery exceeds a straightforward class relationship, looking at white supremacy and settler colonialism. He argued that settler colonialism marked a new moment in world history, bringing together a particular blend of commerce and xenophobia. While racial domination and economic exploitation have long histories before settler colonialism, this new moment is defined by racial capitalism characterized by the slave trade and the genocide and expropriation of lands from indigenous peoples. Dr. Johnson argued that treating the history of slavery and the history of the world as a history of racial capitalism would redefine the historical subject away from the white wage laborer. It would instead center a different historical subject, a racialized subject that has always been at the center of this system while simultaneously being rendered, in Dr. Morgan’s words, “marginalia”.

When the presentations concluded, the panel engaged in a lively discussion about the themes that emerged across the presentations. The full-house crowd offered thoughtful questions and reflections.