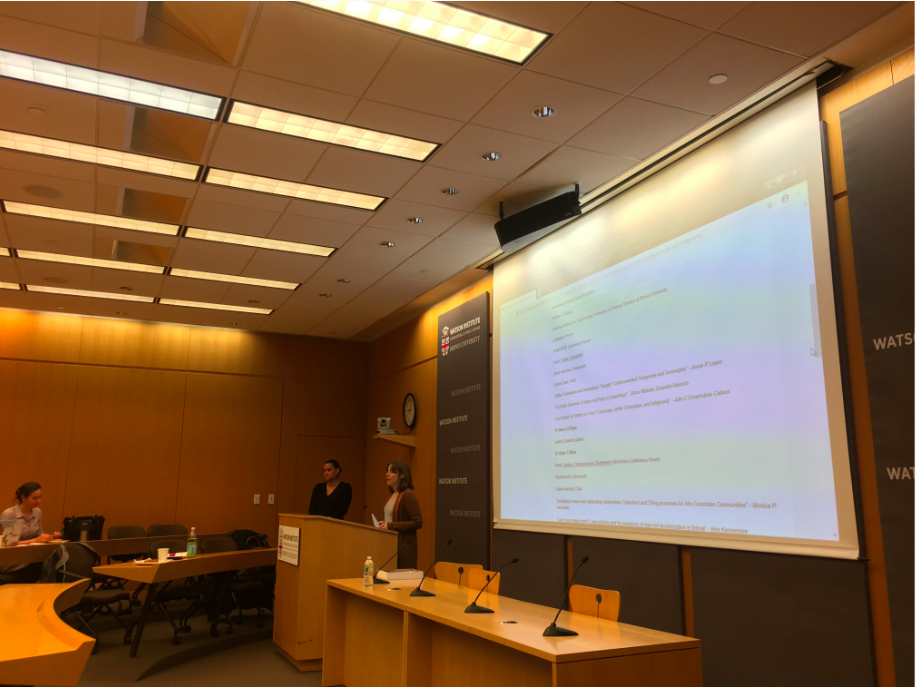 On December 8, 2018, the Center for Latin American and Caribbean Studies and the Sawyer Seminar on Race and Indigeneity in the Americas welcomed 16 graduate students of diverse disciplinary backgrounds to a symposium entitled Thinking Decolonization Hemispherically: Race, Indigeneity, and Coloniality in the Americas. The one-day symposium set out to explore the questions: how are discourses and projects of decolonization conceived across the Americas? How do they travel? And, how may they learn from one another? In this way, the papers and presentations of the symposium sought to put into dialogue experiences of colonialism and decolonization beyond geopolitical and linguistic borders.

The day began with an address by Dr. Juliet Hooker, Professor of Political Science at Brown University, on her concept of “hemispheric thinking,” which served as an organizing framework for the symposium. Developed in her recent book, Theorizing Race in the Americas: Douglas, Sarmiento, DuBois, Vasconcelos, Hooker’s concept of “hemispheric thinking” intends to demystify relationships between the U.S. and Latin America. She traces the ways that ideas of race in these regions develop in relation to ideas about the “other America,” often through selective misreadings that position one region as superior. She argues that this type of comparison overlooks moments of exchange, overlap, and the sharing of ideas that are essential to how ideas circulate and develop, and to how solidarities can be forged. For example, she highlighted how Black and Indigenous movements are often treated separately by analysts despite similarities in the criminalization of these movements as well as their demands. Treating them as separate, is as much a political move as an analytical one. She argues instead for an approach of juxtaposition in which we hold diverse movements and ideas throughout the continent simultaneously to learn from them and develop richer understandings of the race, indigeneity, oppression, and resistance in the Americas.

With this framework in mind, the symposium proceeded with a total of five paper sessions. Each panel included 3-4 student papers and comments from faculty discussants from Brown departments of American Studies, CSREA, CLACS, IBES, and Theater and Performance Studies. Some themes that emerged from these sessions include: the challenge of indigenous mobility and migration to decolonial movements based in territorial sovereignty; interethnic solidarities and the role of race in decolonial social movements; and aesthetic expressions as decolonial performance (full program available here).

Finally, the symposium was closed with a keynote address by Dr. Catherine Walsh of the Universidad Andina Simon Bolivar in Quito, Ecuador. Titled “On (De)Coloniality, Dehumanities, and Decolonizations: Thinking, Theorizing, and Re-Existing in/from the America(s) of South, Dr. Walsh’s talk brought together her work as a theorist, educator and activist who was born, raised, and educated in the U.S. before immigrating to Ecuador in the 1990s. Dr. Walsh warned against the dangers of decoloniality becoming a fashionable term, rather than an on-going praxis. For her, thinking decolonization hemispherically means thinking “with and from the Abya Yala (a concept that comes from the Guna language and used to encompass the entirety of the American continent)”. This emphasis, she argued, is a critique of the directionality of academic and intellectual work from north to south as well as an attempt to break with the centrality of the state. Given, she argued, that Latin America has been the testing ground for the on-going reconfiguration of coloniality, we must look to Latin American