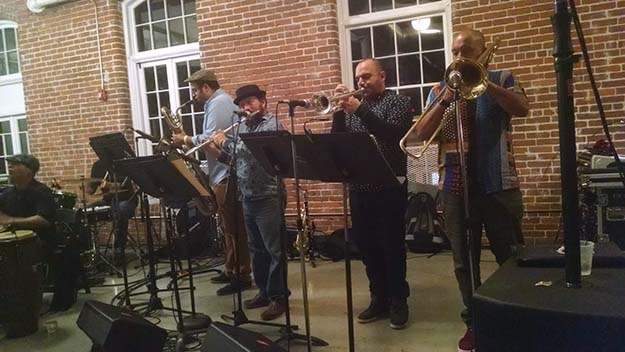 The musical group Viento de Agua hosted by CLACS brought the first semester of the Sawyer Seminar to a close with a dynamic set of events including a percussion workshop and performance. The 13-person ensemble brought their unique blend of Puerto Rican musical traditions including bomba and plena and other popular Latin American styles to their energetic presentations.

In a mid-day workshop, the group’s co-founders -- Héctor “Tito” Matos and Ricardo Pons --  led Brown undergraduates, graduate students, and faculty in an interactive lesson on Afro-Puerto Rican song traditions that had all the participants playing, singing, and dancing along. Matos and members of the band demonstrated different rhythms and variations, taught participants to play pandereta drums, and got everyone on their feet practicing the different dance steps that accompany bomba music.

The performance at Hope Artiste Village brought together members of Brown, the Puerto Rican community, and residents of Rhode Island and beyond. The high-energy show from the band quickly had the audience singing and dancing along as Viento de Agua played a variety of their own compositions and some holiday classics.

The CLACS-hosted visit has sparked plans for new collaborations between the band and members of the Brown community in the spring semester. Inspired by the band’s visit, LACA concentrator Jackson Sayles will study bomba music with Viento de Agua during a research trip to Puerto Rico over the winter break. In the spring semester, the Brown Jazz Band will host the group’s arranger, Ricardo Pons, and plans a program featuring his music for their next concert on March 2, 2019. Pons will also work with the Jazz Composition and Arranging class. Pons has invited the Jazz Band to play at the Universidad Interamericana and the Conservatorio de Música in San Juan, Puerto Rico, possibly as early as this March.

These collaborations between Viento de Agua and Brown come at a particularly crucial time for the band and the island. Their teaching and performance center in Puerto Rico was destroyed by Hurricane Maria in 2017. A year later, the group continues to tour and perform in their ongoing efforts to rebuild and support performance opportunities for musicians in Puerto Rico. You can support the band by buying their CDs and downloading their music – info at their website [http://vientodeagua.info/music/] and also available on most online platforms (Spotify, Apple, Amazon, Google).