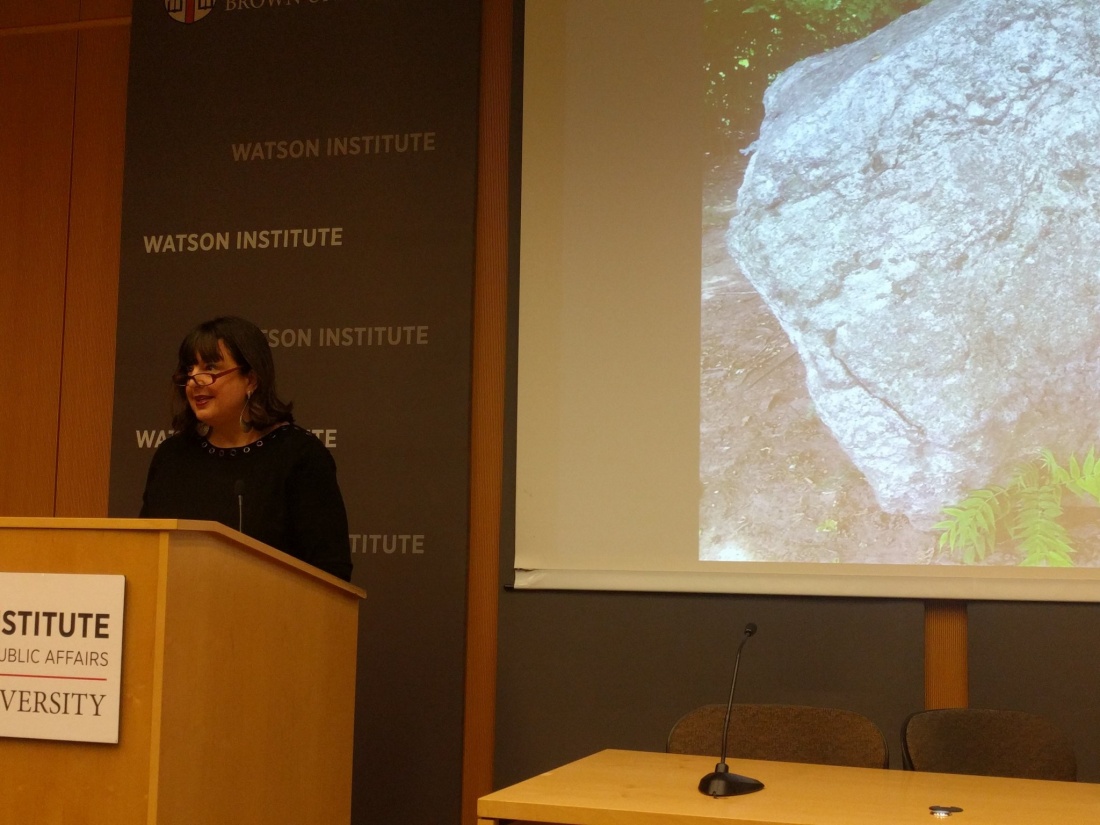 In collaboration with Brown’s Center for the Study of Race and Ethnicity in America, the Center for Latin American and Caribbean Studies hosted J. Kēhaulani Kauanui as part of the Sawyer Seminar series on race and indigeneity in the Americas. Kauanui’s lecture, “Decolonization in Settler Colonial Context: Challenging the ‘Logic of Elimination of the Native’” centered on the materials that Kauanui’s undergraduate students collected about the Wangunk, the indigeneous people of the city of Middletown, as part of a service learning course at Wesleyan University.

Kauanui shared how when she arrived at Wesleyan, the town of Middletown, Conneticut was celebrating the 350th anniversary of its settler founding. Missing from these celebrations, Kauanui noted, were the descendants of the town’s indigenous inhabitants. When she inquired about their absence in the festivities at city council, she was told that they were extinct. Despite these claims, Kauanui found that the Wangunk continued to live in their ancestral territory despite the settler state’s denial of their presence.

Citing scholarly research on Native New England, Kauanui argued that this denial was a result of settlers’ preoccupation with establishing the region as an Anglo-Saxon place. Claims that the territory was ceded to Anglo-Saxon settlers and that its original inhabitants had gone extinct were supported by ideas about racial purity that have also been used to discount Wangunk claims to land rights. The acquistion of land and the elimination of the native are central features of settler colonialism. In order to challenge these practices, Kauanui argued that we must confront the legacy of erasure of indigenous people and negotiate our ethical relationships with the indigenous people whose ancestral lands we inhabit. In doing so, we may start to see what decolonization could mean in a settler colonial context.

Kauanui’s undergraduate course, titled “Decolonizing Indigenous Middletown: Native Histories of the Wangunk Indian People,” included readings by scholars like Linda Tuhiwai Smith who remind us that research has historically served colonial projects, but can also have a role in indigenous struggles for social justice. As part of the course, students conducted archival research, searching for any mention of the Wangunk in property records from the mid-seventeeth and eighteenth centuries and digitized archives of the Middletown Gazette, with the goal of producing a Wikipedia entry on the Wangunk. Ultimately, students and local scholars presented their research at two symposia and had papers published in the Bulletin of the Archaeological Society of Connecticut. Their work demonstrates how scholarly endeavors like the one Kauanui, her students, and scholars of Wangunk history embarked on can challenge the logic of elimination of the native that serves as the basis of settler colonialism.

You can access the recorded version of Kauanaui’s lecture here.