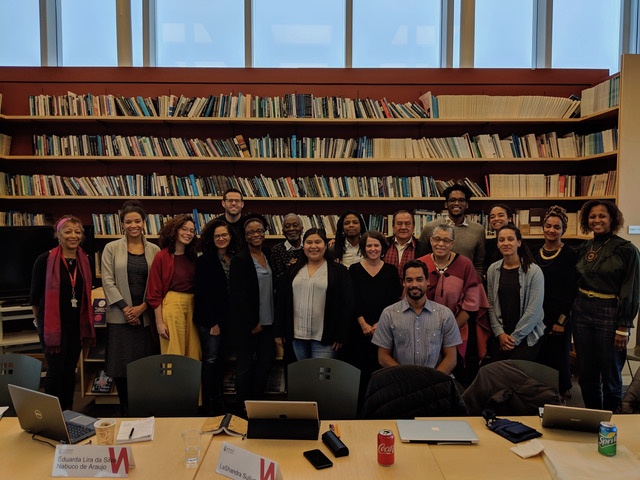 By Sarah Davenport and Melaine Ferdinand-King

On Thursday evening, the workshop opened with an urgent discussion about the ongoing struggles over land and human rights in Guatemala, between indigenous communities and colonial forces. This opened broader discussions about decolonization and what that means in the context of mass displacements of people. Already, participants began to point to how the violence against and displacement of indigenous Guatemalans parallels that of other indigenous and Afro-descendant communities throughout Latin America, Hawaii, and the continental U.S. These connections raised important questions about how we forge solidarity between indigenous people and communities of African descent.

On Friday, ideas of origins as they are conceptualized through place and land was a prevalent topic. Panelists discussed how people figure their identities through their origins, what the possibilities are for a return home or back to one’s origins, conflicts in how people’s onto-epistemological relations to the land, contestations over who gets to claim original ownership over land, and generally how people experience, exist in, and imagine space and place. Throughout the day we interrogated the ways scholars engage in conversations about the reclaiming and retelling of the stories of displaced people, closing the day by focusing on scholarship that emerged from and was completed for the community.

On Saturday, participants continued conversations focusing on common factors of displacement, including colonialism, environmental extraction, climate change, plantation agriculture, state-sanctioned violence, and contradictions between cultural rights and rights to land. The simultaneous dialectic of exclusion yet predatory practices of inclusion were themes that ran throughout these cases in which Black and indigenous people have been forcibly displaced from their homes yet expected to buy into and provide labor for violent socio-political and economic systems that excluded them. Workshop proceedings concluded with a discussion of how to move forward with future collaborations. These included: to decolonize the university and our own ideas about education, expand who we bring to the table in conversations about forced displacement, recognize our shared responsibility to address common oppressions, generate mutual respect between health and nature, and think about what a global solidarity project on race, gender, ethnicity, land, housing, economy, environment, and more would look like.