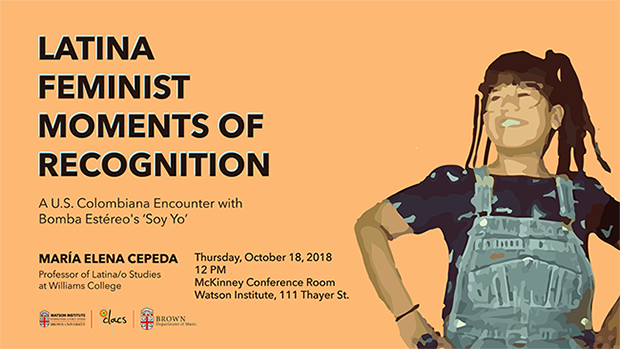 Last Fall, Williams College Professor of Latino/a Studies María Elena Cepeda visited Brown University as part of the Center for Latin American & Caribbean Studies’ Mellon Sawyer Seminar Series. Cepeda’s lecture, titled, “Latina Feminist Moments of Recognition: A U.S. Colombiana Encounter with Bomba Estéreo’s ‘Soy Yo’” was an academic, yet personal retelling of the first time she heard the song ‘Soy Yo’ by the Colombian band Bomba Estéreo. She described how as a U.S. born and raised Colombiana, this 2016 hit and its accompanying music video, served as one of the few moments she can remember in which she felt represented. In a society that repeatedly seems to overlook Colombians, given their lesser sizability in comparison to other Latin American immigrant groups such as Mexicans, Puerto Ricans, and Dominicans—this was one of Cepeda and other U.S.-Colombianas’ few moments of visibility. The attendance for this event was particularly successful, with a nearly full room, and conversation continued well after the lecture was finished.

In her lecture, Cepeda broke down the appeal of ‘Soy Yo’s” music video, which is rooted in its location, the appearance of its protagonist, Sarai Gonzalez, and the interactions between the two. While Bomba Estéreo is a Bogotá-based band, the “Soy Yo” music video takes place in New York City. Within this space, the protagonist is not just Colombian, but U.S.-Colombian, meaning she has roots in both the U.S. and Colombia, that shape and define her world. In her overalls and bundle of braids, Gonzalez comes upon a variety of individuals of different races and backgrounds and engages them with her dancing and singing. Despite the shocked reactions they display to her performance, the protagonist does not falter in the way that she owns her space. Noteworthy about these particular encounters is that not only are U.S.-Colombianas’ gaining visibility, but they are also unapologetic about it. This small space that Gonzalez occupies as the protagonist—she created for herself.

The lecture delivered by María Elena Cepeda will be featured in her forthcoming book “Brand Colombia: Gender and Transnational Media Narratives of Colombianidad” which is currently in progress. It will also be published as its own article soon.

♫ I keep walking and I keep laughing

I do what I want and die trying

What I am doing doesn’t matter to anyone

The only thing that matters is what’s inside ♫

Student Perspective on CLACS Sawyer Fellows Program: I had the opportunity to participate in the Sawyer Seminar Series this year as a member of the CLACs Fellows Program. My duty as a Fellow was to support at least one Sawyer Seminar event through my presence, advertising, writing a report on the event, connecting with the guest lecturer, etc. This experience for me was truly invaluable for me for a multitude of reasons. I would like to especially mention getting to work with CLACS graduate fellow Violet Cavicchi and connecting with Professor María Elena Cepeda, who provided me with advice about doing research, writing an honors thesis, applying to graduate schools, and mentorship. I cannot express how much this encounter meant to me and how influential it has been in my development as a scholar. This experience was truly unmatched. Thank you to the Center for the Latin American & Caribbean Studies for this opportunity.