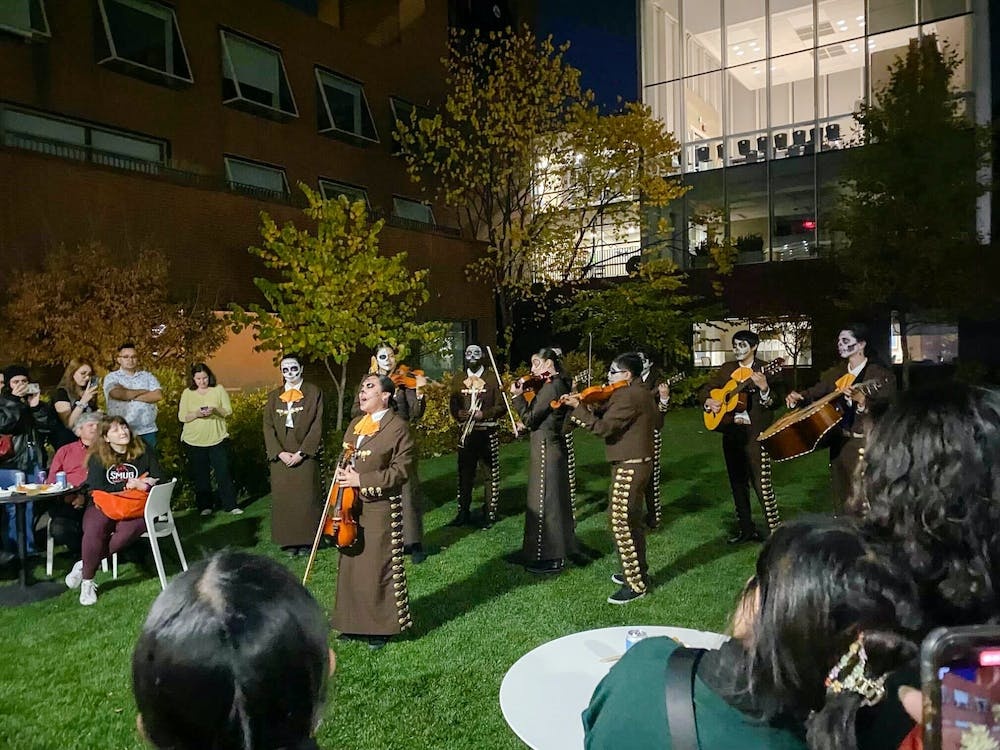 Reposted from the Brown Daily Herald. CLACS would like to extend its gratitude to Mezcla Latin Dance Troupe, which also performed at the event.

Reposted from the Brown Daily Herald.
CLACS would like to extend its gratitude to Mezcla Latin Dance Troupe, which also performed at the event.

Cecilia Valenzuela ’25 was raised with music.She grew up in Tucson, Ariz., where the country’s first youth mariachi group was formed in 1964. She was born into a family of mariachis and music teachers, and she, too, picked up the violin at age four.So, for Valenzuela, it felt natural to join Mariachi de Brown once she arrived on campus as a first-year last year.“I even made it part of my Brown application, saying that it's something that I wanted to join and work on here at Brown,” Valenzuela said. “But COVID happened, and everything kind of stopped — even when we got back, clubs were very much struggling to get back to what they were pre-pandemic.”

After several low-attendance practices her first semester, the Mariachi disbanded. But Valenzuela was determined to revive it along with Jared Cetz ’24 and Alejandro Gamero ’25.“I knew a current senior who I played with as a kid, and I had also met a couple other musicians who were willing to learn,” Valenzuela said. “So Jared, who has helped me revive mariachi this year, said he’d help me with the club logistics such as going to the Student Activities Office.”The club then hosted an info session in May that had “really good turnout,” with 30 to 40 people in attendance, according to Valenzuela.“We spent the summer talking to alumni and people who had previously been involved with Mariachi de Brown, and got a sense for how it was run and what can be improved,” Valenzuela said.Auditions were held early this semester. The performing group, which began with just Valenzuela and Gamero, now has 14 members. The group practices twice a week to prepare for performances, including a Día de los Muertos event hosted by the Watson Student Advisory Council and the Latin American and Caribbean Studies Departmental Undergraduate Group on Nov. 4.“It was really amazing being able to play for an event like that at Brown, a PWI (predominantly white institution), celebrating such an important holiday for the Latino community,” violinist Ariana Palomo ’25 said. Palomo said she had never played in a mariachi before joining, so this performance was her first wearing “traje de charro” — traditional mariachi attire.The group performed songs including “La Llorona,” a folk song often associated with Día de los Muertos, which Palomo said was her favorite. “As soon as we started playing it, everyone was singing along,” Valenzuela said. “That's the one that people come up to me after and say made them cry.”“It's community building, which I think is so essential for the Latino community at Brown,” Valenzuela added.Gamero, who is from Arizona, also feels a sense of community within Mariachi de Brown.

“There’s not really a sense of Mexican culture here because we're so far on the East Coast,” Gamero said. “So, I feel like whenever I practice or perform, it feels like I'm with my people back home.”“It just feels nice to get together with people who come from the same heritage and similar backgrounds,” he added.Moving forward, Valenzuela hopes to continue working with other Latinx groups on campus, fostering a sense of community through music.“I just want to be able to have a space where students can come and play the music that they heard growing up,” Valenzuela said.