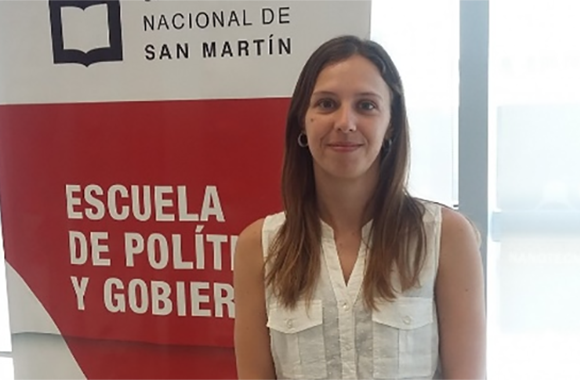 Cecilia Rocha has been studying at Brown this semester as part of the student exchange program between Brown University and the National University of St. Martin in Buenos Aires, Argentina. She has spent three months here on campus working on her thesis in Political Science as a Ph.D. student. Her thesis currently focuses public politics, collective action and multiple inequalities in Argentina, Uruguay and possibly Peru or Bolivia in the future. She works to attempt to understand more about the collective actions of certain groups that are affected by more than one form of discrimination.

Cecilia specifically studies the organization and formation of unions and other organizations for domestic workers in Latin America. Her focus is on this particular population because approximately 99% of domestic workers in her region are women and their involvement in unions contrasts the current masculinized and/or male-dominated culture of unions. Many of these female domestic workers are immigrants, indigenous women, and afro-descendants as well as low-income women often of low social statuses. She studies how these women involve themselves politically, create unions and then form alliances with other unions or groups (e.g. feminist or political groups).

Cecilia stressed that without collective action or social mobilization, reform is not possible. Social change is also not possible without alliances formed between workers, women, ethnic movements and other groups. She stated that while this collaboration is necessary it is also often extremely difficult. One key example she gave of how these collaborations can be complicated was of the interaction between feminist groups, which are primarily made up of middle-class women who often have domestic workers working in their homes, and domestic worker unions.

Her time at Brown has primarily been spent interacting with other students and professors to learn more and improve upon her personal work and research. She enjoys attending Watson events, book presentations and talking to other professors who have similar interests or work on topics similar to that of her thesis. Cecilia said that one of her favorite parts of being at Brown was that she gets to meet and work alongside professors whose work and papers she had previously read while studying in Argentina. She finds the general climate of Brown to be incredibly inspiring and professional and believes that she has greatly benefited from how the Watson mixes academic and cultural events to create an interdisciplinary learning space. This is especially pertinent to her research because it is crucial to approach social problems in an interdisciplinary way due to their complexity.

She appreciates all the feedback she has received on her work from the professors at the Watson and hopes to take everything she has learned while at Brown to her future classrooms. Once she returns to Argentina, Cecilia plans to begin her fieldwork in either Argentina or Bolivia. She has two years left of working on her thesis and after she has finished, she hopes to work in academia as a professor in either Argentina or Uruguay.