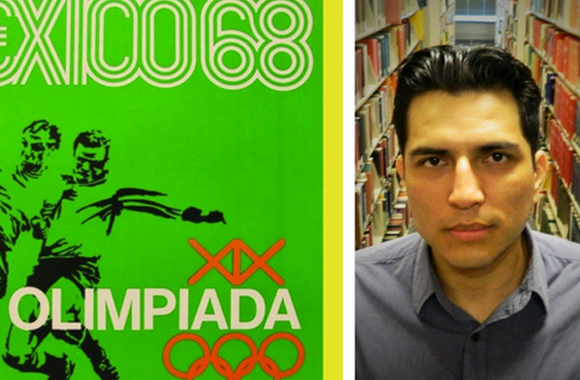 "I often lose track of time because everyone speaks up to share different views from their peers and myself. To be honest I never suspected the huge amount of interest the students consistently display."

Interviewed by Jazmin I. Piche, CLACS Undergraduate Fellow, Class of 2019

Finding time to write becomes more difficult as your professional life grows; however, if you don’t write, you don’t grow as an author. This is a struggle Luis Miguel Estrada Orozco faced while working in his home country of Mexico. Following the example of authors such as Ernest Hemingway and Julio Cortázar, he decided to take a side job as a sports writer. The experience proved to be enlightening. “You work with different points of views, different characters, and different narratives. The more I wrote about boxing, the more I realized I had to go back for research, dates, characters from history, and how things developed over time.”

In his dissertation, Estrada Orozco discusses why he believes boxing, as popular and culturally important as it is, rarely has nonfiction novels. The intelligentsia established the construction of national identity in Mexico. They regarded popular products such as sports with contempt in spite of the fact sports were in the dialogue of the nation. “Despite being in pop culture, cinema, magazines, sports were still very distant from literary circles. Sports did not permeate completely into national identity until 20th century, and not into literature until after the 1968 Olympics in Mexico. It was a time of open challenges to the government, with one of their responses being a student massacre.” He concluded his summary with an analogy for national construction. In the circus, everyone pays attention to the main stage. Yet, around and behind the stage, there is bustling activity supporting the main stage and also allowing the backstage hands their moment to shine. The complete picture must be seen to fully appreciate the spectacle.

Estrada Orozco looked to the United States for a PhD after receiving his undergraduate and masters degrees in Mexico. He matriculated into PhD program in Spanish at the University of Cincinnati (“Go Bearcats!”) in Ohio and began his studies the fall of 2013. It was first time living outside of Mexico. “The community in Cincinnati is historically very diverse. There were many German immigrants and very powerful African communities. There were also noticeable influences of Appalachian, Italian, and Irish cultures. Geographically, everything was so close, and there was also a lot of open space. The history of city and communities living there were also so varying but incredible to learn.” His program at the University of Cincinnati lasted four years. In 2017, he moved to Providence following his acceptance to the Cogut Institute as a Postdoctoral Fellow in International Humanities, funded by the Andrew W. Mellon Foundation. In spite of the short transition period, Estrada Orozco is hard at work. He created and is now currently teaching a course on Latin American sports based off his dissertation.

Losing track of time is a great sign of how successful Sports in Latin America, registered as HISP 1371B, has been with Brown students. The course studies soccer, boxing, baseball and lesser-known sports such as ultra marathons and women’s wrestling in relation to Latin American national narratives, politics, race, and gender. It also studies the representation of and discourse concerning sports in various forms of media. “Most days I see active participation from the students. I often lose track of time because everyone speaks up to share different views from their peers and myself. To be honest I never suspected the huge amount of interest the students consistently display; I thought there might have been a period of slack where I’d really have to show everyone how compelling the material is.”

As the mid-semester point approaches, Estrada Orozco will be busy helping his students shape their final papers, the largest assignment in the course. Yet, before writing the final paper, students of Sports in Latin America must present their ideas to the class. Estrada Orozco believes the feedback they receive from the class is crucial. “Human interaction is to receive feedback, to understand that what you produce will be introduced to broader networks. Also, this is for their personal development. Taking criticisms and asking for opinions is important for grad school and jobs. I would know: I am always discussing informally with colleagues for pointers, critiques, and feedback!” He hopes that his students will apply the knowledge of perspectives, history, and opinions gained from classes so far.

As Estrada Orozco sees it, the future is full of possibilities. After finishing his Sports in Latin America course in the fall he hopes to teach another in the spring semester, this time focusing on an introduction to Mexican culture. Estrada Orozco aims to give “a different introduction using art and lesser known texts for undergrads.” He explains the structure as panoramic, focusing on certain topics using canonic and non-canonic readings and pieces of art. “I want to open the door for other expressions that aren’t as mainstream.”

And although Estrada Orozco has just begun his fellowship at Brown, he has already grown attached. “My original plan was to use this opportunity as a stepping stone for position somewhere else. But now I have found Brown as one of the most fascinating places. What distinguishes it from other institutions are the interactions I have with the students, the many departments, and my colleagues. It’s amazing! Hopefully I’ll stay!” Given his accomplishments thus far, it will be exciting to see how Estrada Orozco makes the most of his time with the university.