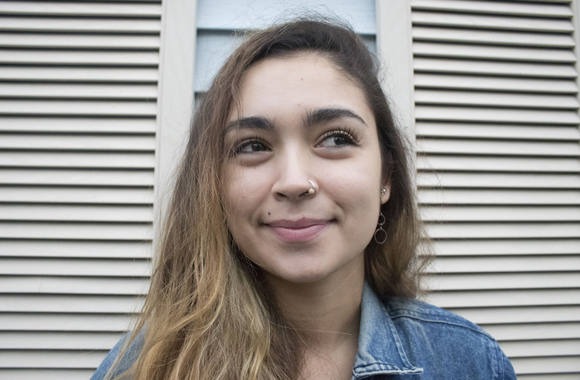 If you walk into the Center for Latin American and Caribbean Studies (CLACS) on the second floor of the Watson Institute you may be greeted with the warm, charismatic smile of Kat Chavez, one of the office’s undergraduate student assistants. Kat, a Los Angeles native and currently in her third year, has been working in the office since her first semester at Brown. She decided to apply for the position because she was interested in being involved with the Center and wanted an on-campus job. Her position includes assisting in administrative work, managing the front desk, and graphic designing documents and pamphlets. However, she also gets to partake in some of the most exciting events and programs that CLACS hosts throughout the academic year.

She fondly remembers one of the first events she assisted, the Brown University Latin Jazz and Pop Festival. During the five-day festival in early October of 2015, she had the opportunity to meet local and international Latin musicians and performers, which she notes was an incredible and fulfilling opportunity. “The festival got me hooked on what I was doing, and it was amazing that the department did this,” she said regarding her experience being involved. Kat noted that the festival was “a cool mixing of things” referring to the involvement of music and art. She said that it showed her that while CLACS events are political due to being part of the Watson Institute, events can also just focus on art.  Furthermore, she was able to combine her work for the festival with her involvement with B-Side Magazine, College Hill’s only music publication and published pieces about the festival.

“Being a student assistant has made me more aware of things I wouldn’t have been made aware of if I wasn’t working at CLACS.” Many times, her supervisor will notify her of upcoming and ongoing events. Kat credits her experience as a student assistant as validating her interests and passions and broadening her knowledge about Latin American and Caribbean artists. She notes that because the art world has canonized artists from more powerful countries such as Mexico and Brazil, artists from Latin America may not appear in art history classes or fall outside of the scope of what is considered part of Latin American art, which often focuses on Western ideals.

Some things that she appreciates about the CLACS is their embrace and promotion of new faculty members and course affiliations, which creates and opens an excellent outlet for people to gain access to the concentration and resources. Kat was also part of the inaugural class of the CLACS undergraduate fellow program, which is geared towards undergraduates of all concentrations who want to be more involved in Latin American studies.

Outside of her student assistant job, Kat has pursued her interests in Latin America in many ways including incorporating them into her academic concentrations of Art History and Visual Arts. This past semester, she held a solo art exhibit, “Mis Muertos,” which was a tribute to passed family members for el Día de Los Muertos and was held the week of the holiday.

Kat has loved being the first contact in the office where she can meet a multitude of speakers and guests. She says, “I am always excited to go to work because of all the people working there!”