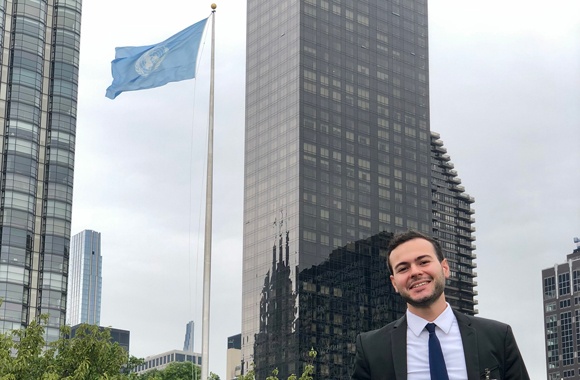 You started the summer working for the Atlantic Council in Washington D.C. as a Young Global Professional. How did you eventually transition to the Permanent Mission of Panama and what was that change like for you?

My time at the Atlantic Council was certainly a formative experience. I was part of a wonderful, brilliant, and fast-paced team that pushed the boundaries of my comfort zone. At the Atlantic Council, I led the launch of a new line of programming on Nicaragua, contributed to a published report on Colombia's National Strike, and co-organized events featuring members of the US Congress, cabinet ministers, diplomats, and private sector leaders from the US and Latin America and the Caribbean. There, as part of the Young Global Professionals program, I was trained by experts including a former US Chief of Protocol and a former diplomat who redesigned the US State Department’s negotiation training.

The transition to my internship with the Permanent Mission of Panama to the United Nations was rather smooth, owing to the invaluable mentorship of a Brown alumna. It was an important change that allowed me to better understand diplomacy at the multilateral level and meet incredible people.

Why was it important for you to represent / serve your country through your summer internship? What aspects of your position at the United Nations were most important to you in making a global impact?

I feel humbled to be a part of a family that has served and represented Panama for over one hundred years — that is a legacy that I take very seriously and one that is inseparable from my personal story. My parents met in Tokyo, Japan while working as diplomats from Panama and Uruguay. My mother was born in Rio de Janeiro when my grandfather was Panama’s Ambassador to Brazil. My grandfather’s uncle represented Panama in the very first United Nations General Assembly. Thus, I was honored to receive an unexpected call from the current Ambassador of Panama to the UN, who did not know me personally or know about my family background, after reviewing my résumé.

I think the most important part of my work was helping position Panama as a country committed to peace and prosperity on the world stage. In the day-to-day, this involved analyzing draft resolutions and discussing Panama’s position with our colleagues at the Panamanian Ministry of Foreign Affairs, preparing briefing materials for bilateral meetings, and drafting a speech delivered by the Ambassador. Diplomacy is a long game, but I hope these actions will contribute to strengthening Panama’s partnerships abroad and support its candidacy for the UN Security Council (2025-2026).

As a senior at Brown, where do you see this experience taking you? How might it bolster potential career opportunities post-graduation?

Your first question is one that I am still working on answering. I hope to land in a place where I can continue to build up my skills and make tiny but growing contributions to improving the lives of others.

I have learned and grown significantly as a result of both of these experiences and my time at Brown. While I don’t yet know where that will lead me next, I feel that I now have a clearer sense of some existing spaces to effect meaningful change.

Felipe recently wrote an Op-Ed for the Atlantic Council on the strategic costs of vacant US ambassadorships in Latin America and the Caribbean.