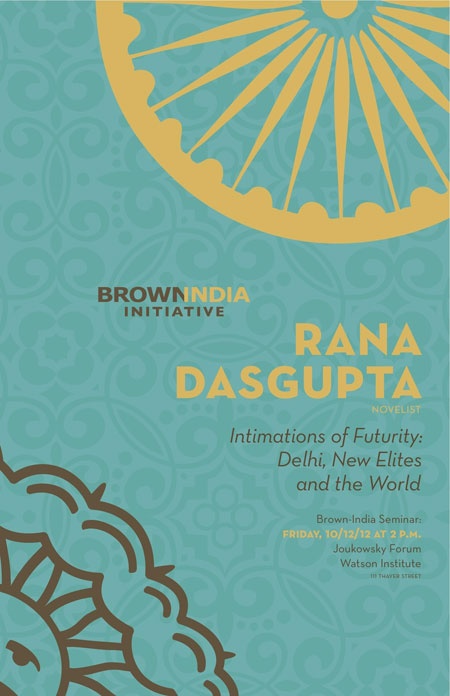 "Intimations of Futurity: Delhi, New Elites and the World," with Rana Dasgupta.

Rana Dasgupta is a British Indian novelist and essayist. He grew up in Cambridge, England and studied at Balliol College, Oxford, the Conservatoire Darius Milhaud in Aix-en-Provence, and the University of Wisconsin–Madison. He lives in Delhi, India.

His first novel, Tokyo Cancelled (HarperCollins, 2005), is an examination of the forces and experiences of globalisation. Billed as a modern-day Canterbury Tales, thirteen passengers stuck overnight in an airport tell thirteen stories from different cities in the world, stories that resemble contemporary fairytales, mythic and surreal. The tales add up to a broad exploration of 21st century forms of life, which includes billionaires, film stars, migrant labourers, illegal immigrants and sailors. Tokyo Cancelled was shortlisted for the 2005 John Llewellyn Rhys Prize.

Dasgupta's second novel, Solo (HarperCollins, 2009) is an epic tale of the 20th and 21st centuries told from the perspective of a one hundred-year old Bulgarian man. Having achieved little in his 20th century life, he settles into a long and prophetic daydream of the 21st century, where all the ideological experiments of the old century are over, and a collection of startling characters – demons and angels – live a life beyond utopia. Rana Dasgupta was awarded the prestigious Commonwealth Writers' Prize for the novel Solo, it won both the region and overall best-book prize.